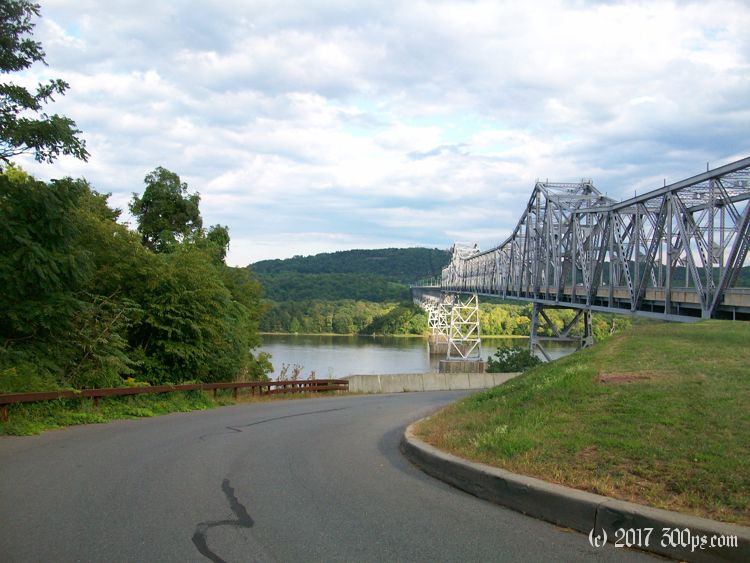 Cheap American chain hotels have sad breakfasts. Sugary cereal in big plastic dispensers, milk from a machine, some kind of industrial pale-yellow drink that is supposed to resemble orange juice. Coffee that the French would call jus de chaussettes (sock juice). Some supermarket muffins round out the menu. I'm joined by a few bleary-eyed travelers crunching on Fruit Loops while they stare at some morning news show on the TV. I'm not unhappy to peddle away from this place.

The theme for the day is due west. Coming out of Westfield I quickly run into the Berkshire Mountains, what they call the Appalachians where they run through Massachusetts, with its ups-and-downs but not terribly strenuous climbing. The backroads pass through pleasantly wild country. I feel like I'm beginning to escape the high-density sprawl of the east.

Late in the day I arrive in Hudson, NY... I realize that I could have planned the route better, I need to take a detour south to get over the Hudson River. I've been over it before in cars and on motorcycles but I forgot that it's actually quite a wide crossing and with a bicycle I need a bridge that will let me on. In the event it's the Rip Van Winkle Bridge (apparently the story references this area) that has a pedestrian/cyclist walkway.

Daylight runs low as I near the Catskills. I was hoping to get into them a ways before dark so I could camp, but darkness falls before I even get there. I'm left with the option of either pitching the tent somewhere in the dark or getting a motel. I opt for the motel.