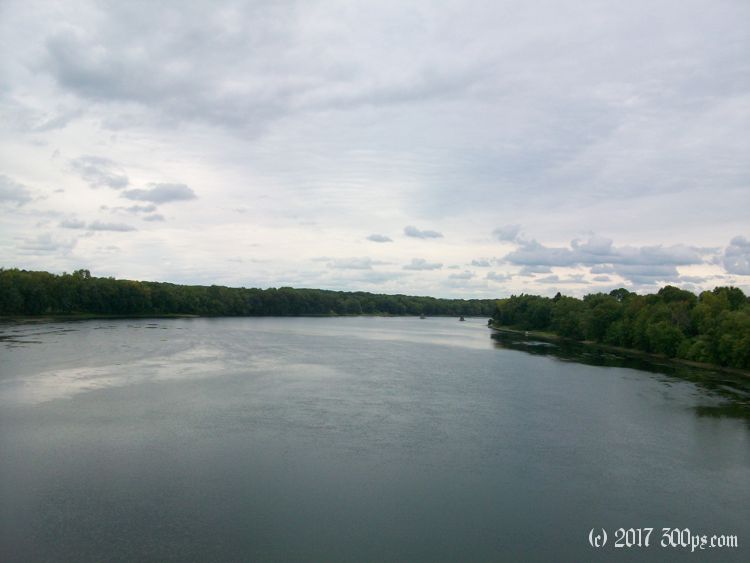 Last night I was dozing, not yet fully asleep; then I heard something loping through the woods, rustling the newly-fallen leaves. It was heading in my direction. My heart started pounding... what is it? I run through my mental list of possibilities: bear? No, not heavy enough. Sounds like four legs. Deer? No, deer don't lope like that. Wolf? Are you kidding me, a wolf in Massachusetts? Being alone in a tent in the middle of the forest in the dark of night has a tendency to make the mind jump to the wildest conclusions. Coyote? Probably. Unlikely that a dog would out at night running through the forest so far away from any houses. I'm somewhat reassured, coyotes never attack people...right? Right? The coyote is still loping along right up until about 20 feet from my tent. Then he freezes. He must have just realized that I'm here. I hear nothing from then on but I know he's out there. I had put my food pannier up a tree so he will probably lose interest. Rather disconcerting to know a wild animal is creeping around my tent. My heart rate slowly comes back to normal. Eventually I fall asleep, my intellect reassuring my primal instinct by repeating that coyotes don't attack people.

I'm up at dawn feeling refreshed despite my late-night visitor. I make breakfast, break down camp, and ride out of the forest. Today I'm wandering down back roads along the Connecticut border, sometimes in MA, a long stretch in CT. It's pure New England out here: farms and woods interspersed with small towns and their wood Protestant churches painted white, colonial houses, a monument to some war on the square. Some road-crew guys get to asking me about where I'm going. They say it will take me at least three months to cross the States... I'm more optimistic than that. I'm betting on two.

I cross the Connecticut River and stumble upon a new bike path. An elderly gentleman walking his dog tells me it's an old railroad line they just converted. I decide to follow it north even though it takes me out of my way; I'm just enjoying being off of the road.

I end up in Westfield late in the day. Following the rail trail into the city has pretty much killed my chances of finding a secluded campsite. A sudden rain convinces me to take the easy way out and get a motel room next to the highway, one of those sad accommodation situations that invariably arise in the United States: a cookie-cutter motel filled with traveling business people, a few lost souls that look like they are down on their luck, a trucker, some retirees probably on their way to see the grandchildren. I have a long talk with the Indian guy that owns the place. He's from Mumbai, been here 5 years, tells me about how chaotic India is compared to here. I can believe it. I buy some mac and cheese at a nearby grocery store. Microwave dinner and CNN tonight. Not exactly roughing it.