Smart View to Cumberland Knob: just 200 dollars left to get to Maine and back 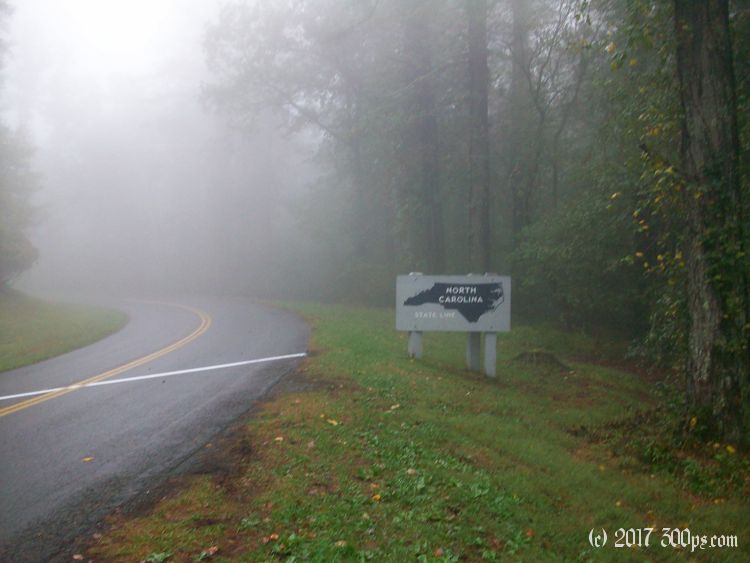 It's pouring buckets this morning. Trying to keep my gear dry is like playing a game of "Go Fish" that you can never win because the matching card isn't in the deck. Things in the panniers end up getting wet no matter what I do. The only dry stuff is in my rack bag that I never open during the day, there I store my dry clothes. It's getting lighter and lighter because my clothes are slowly migrating into the panniers as they get wet... I'm jumping through hoops this morning to try and keep out of the rain as I pack, until it occurs to me that this is completely foolish: I will be soaked to the bone after an hour of riding anyways. I just rush through the break down so I can start pedaling to warm up.

Lots of climbing again today to keep me warm in spite of the cold rain. I run into a few of those touring cyclists again, riding short stints then getting picked up by their support van. I guess they are trying to get their money's worth out of this tour that they've paid for. I'm shooting for a campground at Cumberland Knob to spend the night. I'm on the parkway all day long, climbing, descending, no stores or places to hide other than the occasional park service bathroom. The descents are tougher than the climbs because the relative lack of effort doesn't keep my body warm enough to fight off the dripping, squishy cold of my clothes.

I roll into the campground at dusk, having been delayed by various unsuccessful attempts to wait out the rain. There are some people staying here in camper vans but there's no staff to collect my fee. It's pouring again.

I'm at the washing station doing my dishes in the dark when a guy pulls of on a big Harley. He beeps and yells at me that there's no one at the gate. Not my problem, I tell him, I don't work here. He's looking to rent a cottage or something with a roof. I don't think there's anything like that in this campground. He apologizes, we chat for a while under the eaves of the bathroom/washing station while rivers of water pour off of the roof to splatter in front of us. He has a sleeping bag but no tent. What to do? He sets up his sleeping bag on the bathroom floor and endlessly hits the button on the hand dryer to warm the place up. That's not going to last long...

He tells me his story. A handyman, mid-50's, from northern Florida, on a mission to visit the only U.S. state he's never seen: Maine. He says he has 200 dollars. Two hundred bucks and no tent might get him there but it won't get him back to Florida, that's for sure. It would probably only cover his gas on that big, fat low-rider. He doesn't seem too concerned. Midway through the conversation I'm trying to figure out if he's a few sandwiches short of a picnic or just really Zen. If I only had 200 dollars to my name I would be seriously freaked out. I certainly wouldn't be traveling anywhere. Well I wish him luck in any case and make my way back through the rain to my drooping tent.