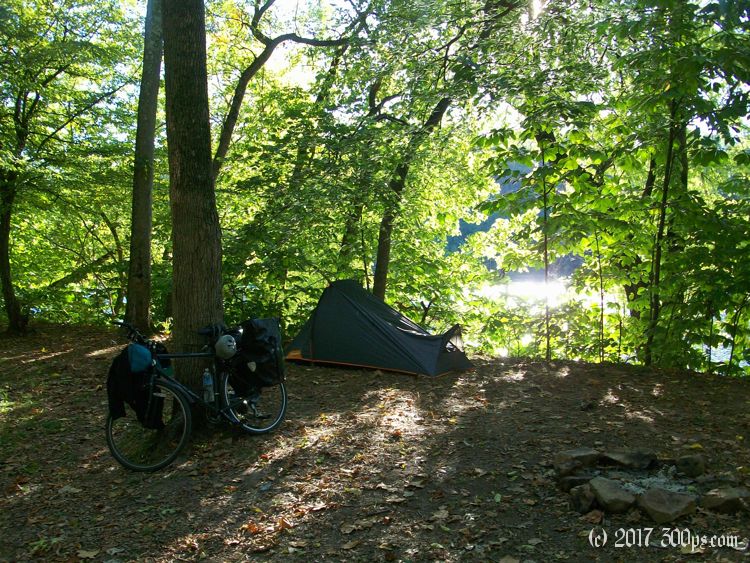 The drunk guy from last night has a bad case of the shamies this morning. I've seen that look before. He is sitting in the bike shop, bleary-eyed, scrutinizing my face for signs of disaproval or rejection while I talk to the owner about routes to Skyline Drive. He is probably not sure what he did last night but suspects it wasn't good. It's never good when you're drunk. At some point today he will convince himself that it's a good idea to have another drink, maybe just one, "this time I'll control it". And so it will be off to the races, another ugly episode or two, another morning after of guilt and shame. I hope he gets off the merry-go-round some day.

I have a mild case of the shamies myself: I forgot to turn off the alarm on my phone and as a result I woke everyone up at 6am while I fumbled through my stuff trying to shut it off. Oops. Two of the cyclists are up and out the door not long after, they hit the road at about dawn heading west on the towpath. The other two leave around 7:30 heading east. I don't get going until about 9.

I'm glad I ran into those cyclists last night. They were right about the towpath: it's a nice ride. For the first few miles I'm on a paved bike path which turns into a dirt road. Mostly smooth, occasional roots to content with. It's a hot day but the path is well-shaded.

I catch up to the two cyclists who left before me around noon. They aren't camping so they will be shooting for somewhere farther down the path than I. The free campsites next to the river look too good to pass up. I find a posted map that lists them, I see that there is one close to Harper's Ferry so I resolve to spend the night there. This will make for about a 60-mile day.

I pass a few other cyclists today who look like they are traveling. Other than a few detours to avoid what I guess are sites where they are working on the path, I spend the whole day winding along the Potomac River away from any motor vehicles.

The campsite I saw on the map turns out to be brilliant: right next to the river, flat ground for the tent, a fire-ring. I set up shop and relax. A series of cyclists stop by to chat, all people who live nearby out for an evening ride. Just before sunset I go for a skinnydip in the river. I gather up firewood but wait until dark to light it, then cook my dinner on the fire. Perfect ending to a nice day.