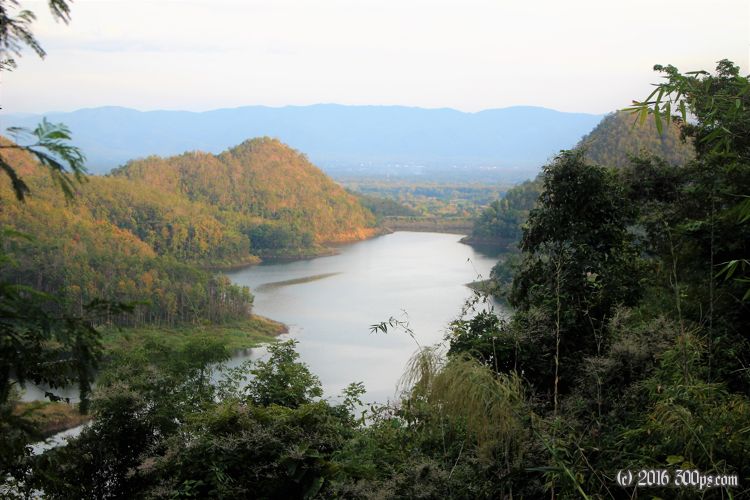 This trip in SE Asia has been pretty easy. Time to spice it up a bit with a challenge: how fast can I get to Bangkok? I know I've got lots of flat riding through rice paddies ahead of me, scenery I've already been through ad nauseam in this country, so I've set myself a goal to pass the time.

I've been abroad most of the last 10 years but I'm still a rabid Boston sports fan. This morning my hometown team, the New England Patriots, is playing in the American football AFC Championship. I considered finding a place to watch the game in Chiang Mai -- surely with all these tourists around some bar will be playing it -- but I know I would be a nervous wreck so I decide to just head out this morning on the bike while I follow the game on my phone.

I follow the Ping River south out of the city. It's not the most direct route, the road mimics the rivers many meanders, but the traffic is light and the only navigation necessary is to not lose sight of the water. To start I'm obsessively checking the progress of the football match on my phone. I want to make some progress so I make a game of it: I can only check the score once every 5 kilometers. This does wonders for my average speed. Brady and company are kicking the Steeler's ass, contributing to the overall good mood and motivation. By 11am I've already got 50 kilometers on the odometer. This could be a big day...

By noon the Patriots have won and I've already ridden 70 kilometers. I celebrate with a minced pork omelette over rice at a small roadside stall. The owner comes over to ask where I've been and where I'm going. We manage to communicate and have a laugh even though between my Thai and his English we probably have a shared vocabulary of about 30 words. The omelette is excellent.

After lunch I leave the river to head south through the fields so I can pick up 106, a larger road that will put me on track towards Bangkok. Not long after I've reached it I ride up behind a cyclist with panniers who looks like he's touring. I say hello but he just growls at me. My immediate guess is he's German. A bit of prejudice there... I suppose he could be from any country that manufactures tall white guys, but having had many such encounters with disagreeable people on my tour through Germany, that's the assumption I jump to. I pass him on a hill and never look back.

A few hours later I run into another touring cyclist heading north. He is from Basque country in Spain, on his way to Chiang Mai to try and get a 3-month visa for China. We exchange notes on that. I've heard from a number of cyclists that China has stopped giving out those visas unless you apply from your home country. The best most people have been able to get is a one-month visa with the possibility of renewing for one more month. I wish him luck. His gear has that look of someone who has been on the road for a very long time on a very tight budget. He tells me he camps at temples almost every night. Just two kilometers down the road I stop to talk to another cyclist, a Dutch guy who spends 6 months of the year in Thailand, on his way south like me. We compare notes on tropical diseases: he says he contracted Dengue fever last year here in Thailand, I tell him about my South American Chikungunya odyssey. He is planning on stopping in the next city, a place called Li, for the night. It's about 25 kilometers from where we are. If I stop in Li as well it will make for about a 135-kilometer day. It's still pretty early though, I've got about 4 more hours of sunlight; it seems like a waste to leave all that time on the table after such a big start to the day. He says he'll follow me as we get riding again but he drops off pretty quickly. I'm still holding my frenetic pace from this morning.

I'm in Li around 3pm. From here to the next city it's another 55 kilometers of what looks like farmland and mountains on the map. That's going to be cutting it close with 3 hours of light left, particulary if there's a lot of climbing. I order a pork egg noodle soup while I think it over. What the hell, I said I was going to make this a challenge, I load up on water and some snacks at 7-11 then get back on the road south.

Fortunately the climbing through this section doesn't turn out to be too strenuous. It would be a lot tougher in the other direction. Even so I have to keep the pace up to beat the sunset.

I'm out of the mountains and onto the flats as dusk falls. I ride the last 3 or 4 kilometers through Thoen to my hotel in the darkness (invariably a bad idea to ride in the dark, as usual I get bombarded with the little flies that love to come out in the early evening...). After checkin a hotel employee leads me to a conference room to store my bike. There are two other bicycles already there -- with front and back racks -- definitely touring setups. Maybe I'll see them at breakfast. I take a shower and just eat in the hotel restaurant; I'm too tired to go out looking for food. I collapse into bed exhausted at 9pm. 185 kilometers is my longest day so far since I've been in Asia.

726 meters of climbing according to Strava.