7 kms east of Tica Tica to Potosí: Gringo incidents and a climb that wouldn´t end 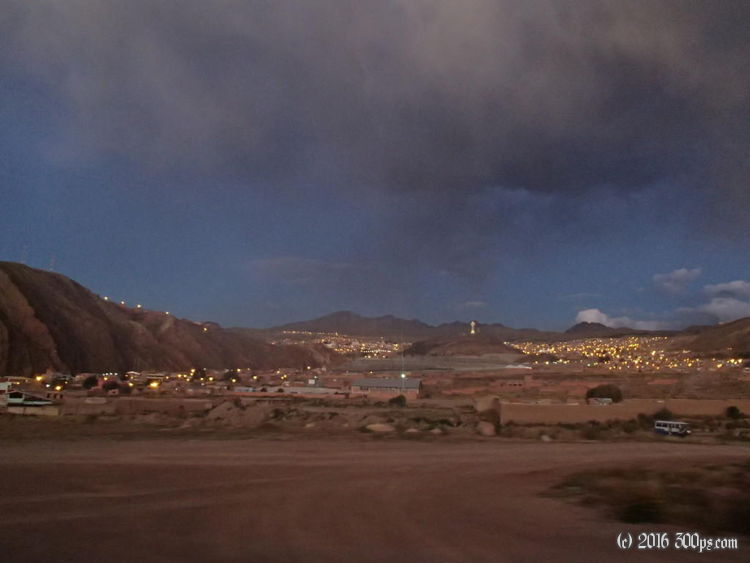 I was up at 5:30 to get out of this spot before light. It was a struggle to get everything out onto the dirt road and then up to the highway. From there I finished the climb up to 4,000 meters, followed by a long descent into another valley. The mountains had been blocking the sun to the east, keeping the temperature around 0, until I got halfway down the descent where I stopped for breakfast in the first patch of sunlight for the day.

At the bottom the road started winding along a river canyon that reminded me a lot of the canyon between Cafayate and Salta in Argentina. Beautiful scenery dotted with the occasional poor-looking village. I had a coffee at the first restaurant that actually looked like a restaurant, before I had seen a few small houses with restaurant signs but they looked like a mess inside so I passed. Back on the road about 15 minutes later 3 teenagers were walking towards me as I climbed a small hill and one of them said: "Hey look at the gringo." I yelled back at them: "Don´t call me gringo, wey!" (Wey is like Mexican for dude). They kept walking and didn´t say anything back. I probably shouldn´t be getting into it with people like this, it could come back to haunt me as traveling by bicycle leaves you about as exposed you can possibly be, but I just find that behavior totally obnoxious.

The rest of the day consisted of climbing a couple of hundred meters, dropping down into a valley, then another climb, etc... The scenery was nice and the weather was good. I wasn´t sure if I was going to make Potosí, the distance was easily doable but I didn´t know how much climbing lay between me and the city. As it turned out there was a ton of climbing to do. As sometimes is the case I just got it in my head that I had to reach the city. Around 5 I started a climb that just never seemed to end. I considered camping at different spots a few times but in each case I said the hell with it and continued on. At one of these spots a man called out "Gringo!". I gave him a good cussing out. So much for my resolve to take it easy in these situations.

I started running out of light and I still wasn´t at Potosí. The road would start going downhill and I would think this is it, I´m there, only to find another set of switchbacks farther on. When I had the city in sight it was almost dark. What I didn´t count on is that Potosí is the San Francisco of Bolivia, built on the side of a mountain, with streets that have grades in the 10 to 20 percent range. As I climbed up through the city I saw nothing that resembled a place to stay for the night. It looked like the center was high up on the hill, so I just had to suck it up and climb my ass off. I was standing on the pedals for most of the way (a good 3 kilometers) even with the 34 tooth gear. I reached the center completely nackered and grabbed the first hostal I saw. At about 12 dollars it is more than double what I paid in Uyuni but still ridiculously cheap. Given its location and decor I think this hostal is what passes as a nice place in Bolivia even though it only costs 12 bucks.

I took a 10 minute shower. I was so cold once I stopped riding I just couldn´t get out. It was a monster day: 118k ridden and 2,000 meters climbed, I think I´ll call this a triple-double.