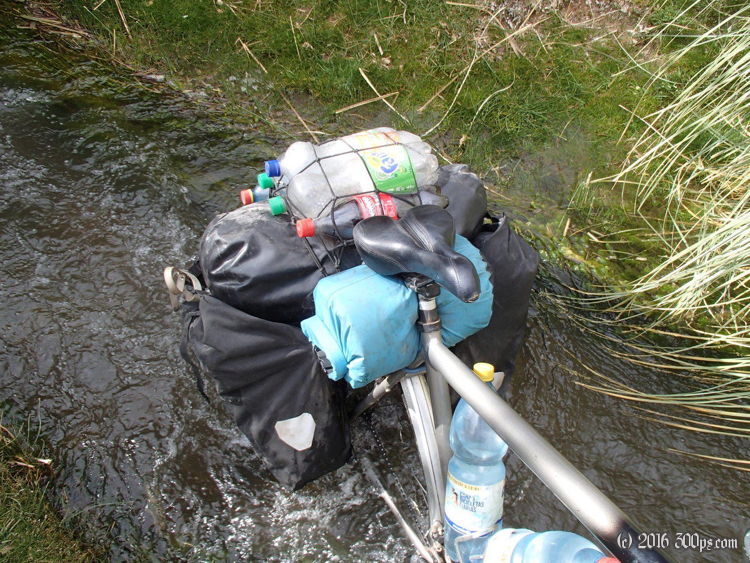 A long climb today in the heat and sun. For the first 55 kilometers I continued on the road from La Juntas to La Guardia. I only saw three cars until 4 in the afternoon when I came to the junction of the more direct road to Copiapó after the Cuesta de los Castaños. The road climbs up along a river past more grape vines early on, then small pastures with a few temporary shelters for those tending the herds.

After the junction there were a few small indigenous communities. At one of them I bought a liter of Coke and some bread. The older woman who sold me the stuff said she had been to Argentina a few years ago as part of a cultural exchange between indigenous peoples; her daughter was part of the tribal government at the time and had organized the trip. She said she wanted to go back. Her three little poodles were cute but japped the whole time I was there. About 10 kilometers later I reached la Guardia where the road splits: one branch heads up to the border and the other goes to a big mine. There was a fair amount of truck traffic on this road for what I assume is mining business. La Guardia has nothing other than a couple of houses.

I had left los Loros (where the carabineros station is) yesterday with 8 liters of liquids. I burnt through it a lot faster than I would have thought due to the heat and I was nursing the last bottle when I reached La Guardia. I didn't want to drink from the river until I got past this point and any potential pollution from the mine. I headed up the border road and only made it a few kilometers before thunderstorms rolled in. I found a place to camp and set up as quickly as I could, beating the rain by about 10 minutes.

I made a huge dinner planning to eat some tomorrow because I was running low on breakfast/lunch stuff. I'll have to be careful with the food from here on out. Following the advice of the old woman at the hospedaje in Vallenar I ate a lime, she said it would help with the altitude, why not? I'm at about 2,700 meters right now... the pass is listed as 4,160 with 63 kilometers to go.