Unknown beach to Ruta 1 km 53: Away from the coast for a while 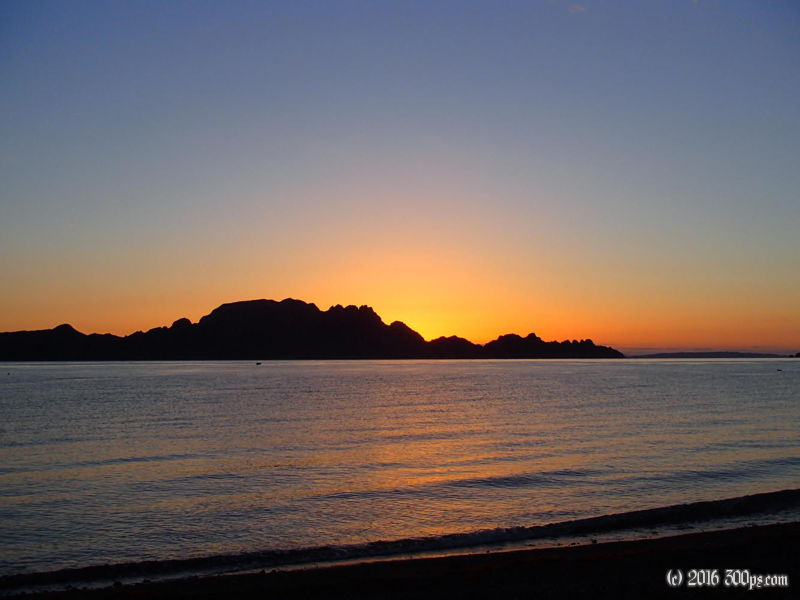 I had another visitor poking around the campsite last night. It was slow and methodical, probably a big rodent, nocturnal visitors will probably the norm from here on out. I got up at dawn to watch the sun come up over the islands off to the east. When I started packing up I realized that the back tire was flat; not surprising given all the heavily armed plants lurking around my campsite. After fixing it I headed up the dirt road leading away from my private beach to the highway. Not long after getting on the highway I came across the exit for Puerto Escondido and decided to check it out in hopes of finding a treat. There was a restaurant and what appeared to be a little stored but neither were open. Not much else besides a port filled with sailboats from the U.S.

The road followed the coast up to Loreto. I chatted for a while with a guy guarding some heavy machinery for highway work. He told me I was in for a whole lot (un chingo) of desert from here to the border…. Well that was to be expected. A cruise ship was parked off Loreto, disgorging scads of American retirees into the town to buy trinkets etc… A bunch of them asked me what I was up to, it got so that I was having difficulty getting things done with all the chit-chat. Admittedly a luxury problem. I did eventually get some breakfast, get on the internet, and pick up water and food at a grocery store. Prices on the Baja are quite expensive relative to mainland Mexico; it makes sense since everything is basically imported from a good ways away. I heard some more griping about the tax reform that went into effect recently. The major complaint is paying IVA (value-added tax), it has become a lot more difficult to avoid it. Well Pemex isn’t what it used to be and Mexicans have been getting away with paying relatively little tax forever so it´s hard to feel too bad for them, though I can understand how it is particularly painful here on the Baja since prices are already high.

After Loreto the road strays from the coast. I was hoping to reach the spot where it rejoins the water south of Mulegé but too much time wasted in Loreto plus the persistent headwinds quashed that notion. I road until 6ish then headed off into the desert to camp. I had run out of water this morning so today I was well prepared, no drinking of the grey water tonight! Dinner was the usual but it was delicious.