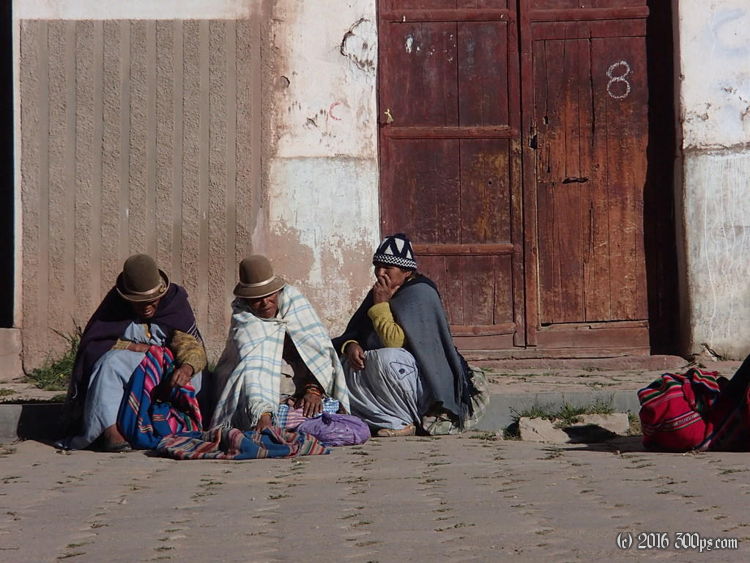 Sunday morning was market day in Puerto Acosta, a completely different town from last night with the main square hopping with people come to sell their wares. I stepped out early to get something to eat and ended up in a heated argument with 5 young guys who had called me over with the usual "hey gringo". I told them not to call me gringo and we were off to the races. The guy who was doing most of the talking was trying to tell me that there was no discrimination in Bolivia. My contention was that if people yell out "gringo" when I pass by and consistently try to rip me off because of the color of my skin, then that´s discrimination. We went at it for about 15 minutes and left on good terms. I don´t think I changed anyone´s behavior but I made my point.

I went to the square for api (a hot drink made from two different kinds of corn, sugar, and cinnamon) and fried dough. I was a hit at the market; at least 10 different people came up to me and asked about my trip and the bicycle. I´m leaving Bolivia on a good note after all...

The road to the border is a sharp climb on rock and sand that took a couple of hours of slogging. When I arrived at the Peruvian border post no one was there even though a radio was playing and a couple of cellphones were lying on the desk. I waited 15 minutes until the police officers arrived on a motorcycle, they had gone to town to eat. Pretty funny how lax the border checkpoints are here compared to other countries. They noted my information and told me I would have to get my entrance stamp in Puno or Juliaca. I had already heard about this so it was no surprise.

In the town of Tilali just beyond the border post the pavement started up again, winding along coves of Lake Titikaka. The first thing that struck me about Peru is that there is a lot less half-finished stuff around. In Bolivia there are half-finished things all over the place: buildings, houses, roads, sidewalks, etc... It's rare to see a structure that doesn't have rebar sticking out of it. Most of the country looks like someone got started on a project and then just went to lunch. There was one big climb starting near the town of Moho that took me up over 4,200 meters... I rode part of it with two teenage boys on mountain bikes who asked me all about my trip. They were shocked that I camped most of the time, they figured I would have been robbed or worse by now. After the climb came a long descent back down to the lake. I spoke to a bus driver who waved me over for a while. He offered to take me to Juliaca but I politely declined saying the goal of the trip was to maximize suffering...

As the afternoon wore on I had a decision to make: either camp or make a run for Huancané. The dilemma was that I only had the 20 soles (about 8 dollars) that I had traded Argentine pesos for with Alain back in La Paz. I didn´t know if this would be enough to get a room and something to eat, and I didn´t know if there would be a bank in Huancané where I could get more. If it wasn´t enough for a room I would be stuck in a city at night with few prospects for camping. As usual I went for it, the area is pretty heavily settled so camping opportunities were minimal anyways.

I made it into Huancané at dusk and found an ATM on the main square. The bad news was that it was out of service. I checked an hospedaje that had rooms for 15 soles so I took it then went looking for a 5 sole dinner. I ended up with a hamburger for 2.50 then got on an absurdly slow internet connection at a cyber which cost me 1 sol, leaving me 1.50 for tomorrow. Hopefully the ATM will be working tomorrow when the bank opens, it will be Monday at least. Fortunately I had stocked up on empanadas at the market in Puerto Acosta so I didn´t go to bed hungry.

The time here is an hour earlier than Bolivia, it will make for short riding days unless I get up even earlier than usual. I passed 10,000 kilometers for the trip today.