Craters of the Moon: Back country day 1

I try to gauge what it is: four feet, fairly heavy, I'm guessing a coyote. I wish the ranger hadn't told me about the cougar. I reassure myself with the perhaps faulty logic that a cougar would be too stealthy to be heard... 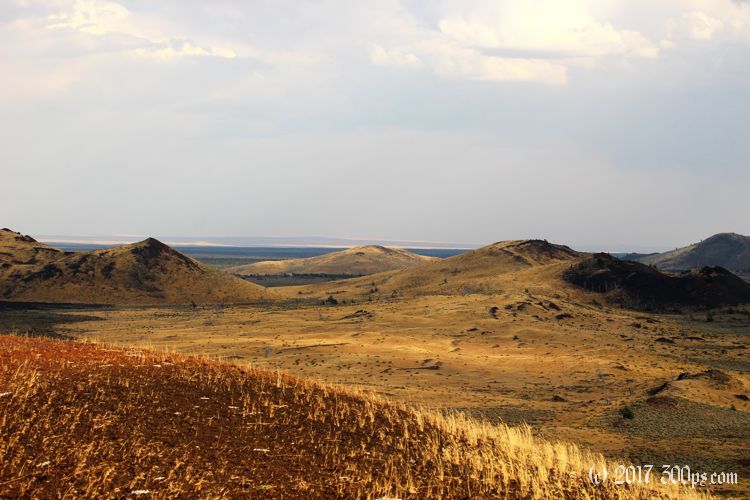 The limiting factor for this hike will be water. Given yesterday's consumption of 8 liters over the course of the day that included a 7-mile hike, I figure the 8 liters I'm going to carry in will only get me through 24 hours (and probably not all that comfortably). I'll have to limit my activity somewhat, 4 miles to hike in then a few more to explore the area around Echo Crater. I'll just hike straight out tomorrow.

I park the motorcycle at the trailhead, put the cover on and lock down what I can, then I grab the pack and head out over the lava field. It is scorching hot on the basalt.

I pass a young couple (I'm guessing Eastern European) who are hiking on the Wilderness Trail. They don't have much with them, and I'm a little worried when I look back from the crater to see them still on the path. They turn around but they've got a 3-mile return trip to do with no water. I hope they make it out okay. I met a guy in Arizona once who told me that he found a young Dutch woman passed out in a ditch by the side of the road in the Sonoran Desert. She had only brought one liter of water on her ride. It's a very different environment in these deserts, I've learned to respect them and to be as prepared as possible. I suppose if you've never seen anything like it in your life you might be prone to making mistakes like not carrying enough water.

The crater is impressive. There is actually a crater within the crater, I choose the lower one to camp in because it has enough trees to offer some shade. A massive rim of chaotic basalt dominates the view for 270 degrees.

Once camp is set up, I go exploring around and above the crater. There are nice views of the surrounding lava cones and buttes, I'll be back at sunset to take some pictures.

A bat is using my tent as a launching pad for its forays. I hit the sides to make it get off, I'm afraid it will tear the rainfly with its claws. After a while he gives up and moves on. I wake up in the middle of the night to soft sounds on the crushed rock. I try to gauge what it is: four feet, fairly heavy, I'm guessing a coyote. Shit! I wish the ranger hadn't told me about the cougar. I reassure myself with the perhaps faulty logic that a cougar would be too stealthy to be heard... I fall back asleep with my knife in my hand.