The Park Service description says this trail 'switchbacks relentlessly and steeply'. I don't disagree with their assessment... 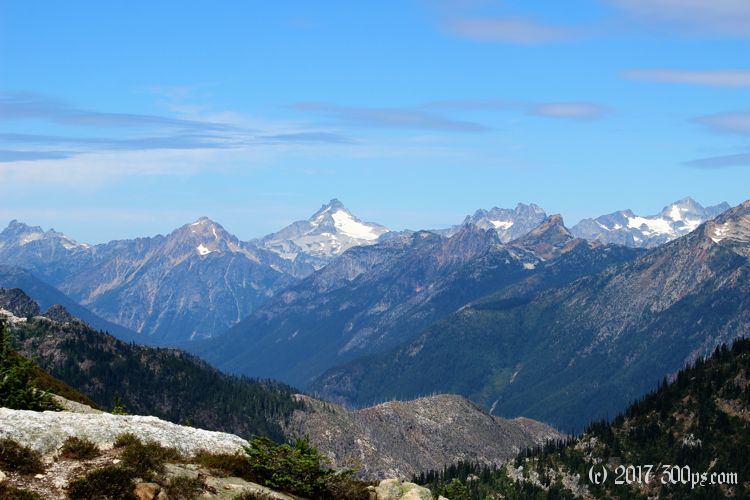 Yesterday I rode down to Winthrop to get gas and go to the library. 5 miles from town a mule deer comes running full speed out of the woods to my left. When I see it the deer is already in the other lane. A van is coming in the other direction, we are both traveling at about 65mph. I slam on the brakes, the motorcycle's nose dives, I see the van's nose dive as well, and the deer just threads the needle right between us. I'm guessing I miss her by less than 10 feet; I'm so close I can see the brown spots on her coat and the look of panic in her right eye. I have visions of skidding down the road on my back, the motorcycle flying off into the woods. My heart is beating out of my chest, my hands are shaking. The van keeps on driving. So do I. Like nothing happened. Life goes on, even though it was almost over (or at least seriously complicated).

The trailhead for Sourdough Mountain is behind some kind of parking garage for the Gorges River Dam employees. I park on the side of the road, slip out of my jeans, lock the helmet to the bike, slip on my day pack, then it's time to hike.

The Park Service description says this trail 'switchbacks relentlessly and steeply'. I don't disagree with their assessment. From the trailhead to the top it's nothing but up.

I bump into an older gentleman on his way down. He's in a bit of a state, saying he made a huge mistake. I ask him what, he says he lost his hat and can't continue without it. I just saw a hat hanging from a bush not 50 feet down the trail, I tell him. He lets out a big sigh of relief. Seems like a lot of drama for a hat, but what do I know, maybe it has some special significance.

I pass a guy who is carrying a fully-loaded backpack. I ask him if he's going to camp up here, he says yes, he got a back country permit to spend the night at Sourdough Camp (about a mile below the summit). He is sweating, panting, and looking exhausted. I don't blame him, I wouldn't want to be hauling a 35-pound pack up this mountain. Would be cool to camp up here though.

The trail crosses a creek at the sign for Sourdough Camp. I see 3 young Asian women scrambling up the creek rocks, I figure they must be on the trail. I pass them, ask them if they are sure this is the trail. They say yes. 5 minutes later I'm saying "no way" to myself, this can't be the trail, it is becoming a hard and steep scramble up the stream. I turn around; on the way back I tell the women this can't be it, but they don't look like they believe me. Back near the sign for the camp I find where the trail crosses the creek and continues up the ridge to the east. That will teach me not to assume other people know where they are going...

The summit has spectacular views of multiple lakes, snow-capped mountains, and glaciers. I hang out for half an hour to rest and soak it all in.

The return trip is easier but all that steep downhill does get tough on the knees after a while. I fashion a couple of walking sticks out of pine branches to make the descent a bit easier.

I'm exhausted when these "relentless switchbacks" finally flatten out to dump me back at the trailhead. Greta awaits patiently. I'm tired but loose and feeling good, all tension has been beaten out of me by the mountain. I go through the motions without thinking, this motorcycle routine that is now pure muscle memory. Down off the center stand, right leg over, heave Greta up straight. Choke on, turn the key, hit the starter. Clutch in, downshift, slowly roll Greta to a U-turn. Choke off, tap the rear brake to cancel the brake light warning, cancel the directionals, a glance at the instruments to make sure no warning lights are on. Over the bridge, left turn onto 20, I wind her up to 6,000 RPMs in second. Third, 6,000 again, into fourth, I'm already going 60. First curve, downshift to third, ease my hips to the left. The double-yellow line snakes towards me. Drop the shoulder, the bike dives lower. Watch the peg. Look through the curve, feel the tires holding the line. The road straightens out, throttle up, let the acceleration pull me up out of the turn. Upshift. Right curve coming up. Downshift. Greta is yelling herself hoarse. Drop right hip, lower the bike, white line snakes in. Up and out, a minivan ahead with kids bicycles strapped to the roof. Double-yellow line. Fuck it. This morning's close encounter with deer-induced death is already forgotten. Left turn signal, punch it, swerve out, blow by, right turn signal, swerve back. Repeat for 50 miles. I'm positively glowing when I arrive back in the campground.

Strava says over 5,000 feet for the climb, that's even a good day on the bicycle. I'm relatively new to these longish hikes -- and to tracking them with GPS apps -- but I think this probably the most elevation gain I've ever done on foot.