Boston to Devils Tombstone: On the road, first night in the Catskills

Mostly highway to get out of Massachusetts, into New York, camping in the Catskill Mountains. 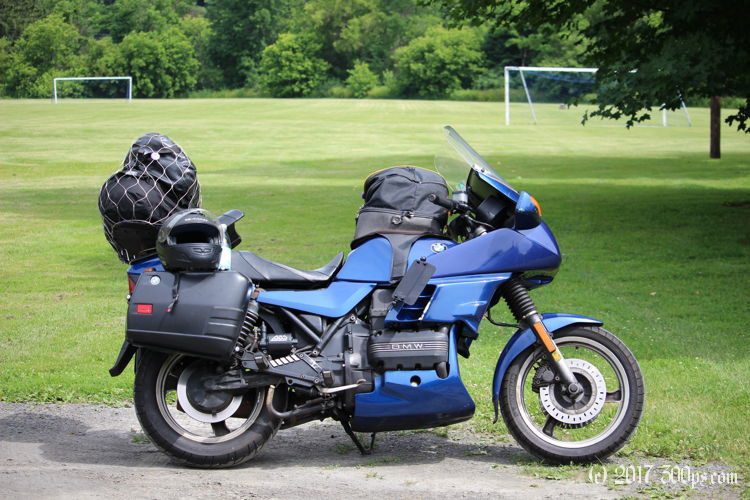 I'm not off to an early start. After coffee, breakfast, and strapping/jamming my gear onto/into the motorcycle, I finally get riding around 11:15. I'm debating on whether to take back roads through Massachusetts but in the end I just opt for the MA Pike highway to get out of the state.

The motorcycle seems to be running fine. She likes to run at 6,000 rpm's in 5th gear, but that's equals somewhere between 80 to 85 mph, a bit to fast for the Pike which is crawling with state troopers. I do it when I think I can get away with it. An uneventful couple of hours, then I get off the highway near Sturbridge, head south then west. I stop at a small park to make some lunch.

I have fond memories of the Catskill mountains from when I cycled through back in 2010. I'm headed that way to hopefully see a bit more of them.

I pass a campground, think twice about heading to the one further down the road that I had my sights on, and turn around. It's getting late and I'm tired. The ranger says he has a 1983 BMW R that he travels and camps with. The campground isn't ideal with it being close to a road but I might as well spend the night here. The fee is 16 dollars plus 5 bucks for being from out of state (the racists!), plus a 2.75 fee to set me up in the system. 23.75 seems like a lot of money to camp with no showers. That's probably the way it's going to be in the U.S. I'm so used to bush camping with the bicycle that it feels like an insult to pay for it. Not so easy to bush camp with a 650-pound motorcycle that can't ride on dirt.

I fire up my MSR stove (haven't used it for almost 3 years) and it works fine. I shut it off so I can prepare my food for cooking, then when I go to start the stove again it won't work! Since it's been so long since I've used it, I should have gotten one of those rebuild kits. At any rate it looks like I'm cooking on the fire tonight. I scrounge around the campground for enough wood to get it going. Dinner is a lot slower this way but just as good -- or even better.

My first night in a tent since France back in March. My new sleeping mat seems to be okay. But then they always seem okay in the beginning until they puncture or break or something.