The high school looks like a corporate headquarters (oil money). Everyone is driving a big 4x4 truck (oil money). The city park where I stop for a rest is immaculate and extremely well appointed (oil money). At the grocery store about half of the customers are Mexican (labor to make oil money)... 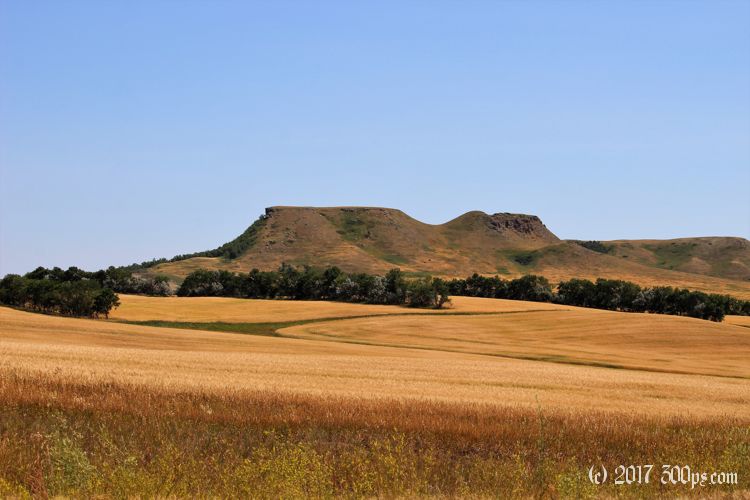 I bought some muffins and fruit last night at the supermarket to avoid having to look for breakfast this morning; it's just out the door and onto the plains...the plains. They have their own beauty though: bright green fields interspersed with brown ones (wheat), the occasional lake or pond of deep blue providing a stark contrast to the surrounding land. Today's fun (to avoid falling asleep with all this straight riding) consists of passing things: cars, trucks, tractors, etc... I'm not picky about what I pass. It's quite hot again today.

The road passes through an Indian reservation. I stop because I need a rest, despite my better judgement. I find a picnic table next to a school where I sit to replace some of the fluids I've lost in all this heat. I see a disheveled looking man heading towards me... oh shit. This is what has happened to me before on reservations, I get accosted by alcoholics looking for something. This guy wants to sell me a backpack he says he bought yesterday. I say no thanks. Luckily he gives up easily. One time on an Apache reservation in Arizona it took me 15 minutes to escape two blind-drunk men who wanted to tell me their life stories.

Since early on in Minnesota I've been asking people what there is to see in North Dakota. I got a lot of blank looks. I see the Roosevelt National Park on the map though, that looks kind of promising. I decide to head for it, it's only a short distance south of this east-west line I'm drawing across the plains. The nearest town is Watford City. I roll into it in the late afternoon. Fill up on gas, then shopping because I know I'll be camping tonight in the park. This city is one of those oil-fracking boomtowns I've heard about. The high school looks like a corporate headquarters (oil money). Everyone is driving a big 4x4 truck (oil money). The city park where I stop for a rest is immaculate and extremely well appointed (oil money). At the grocery store about half of the customers are Mexican (labor to make oil money). There are huge fields of caravans that are temporary housing for oil workers. Just a surreal kind of place; particularly given that I've just driven for hours through an agricultural zone and an Indian reservation, both of which look decidedly less rich than Watford City.

I head south to the park. As soon as I see it I know I've made a good decision: it's a big canyon of eroded rock somewhat reminiscent of Utah. There's no one staffing the gate (too late), but there is someone working the visitor's center, in the event a young woman from Pennsylvania. I try to get as much information as I can out of her about the park and what there is to do. On her recommendation I camp here in the "North Unit" of the park. She is adamant that I not hike the Aschenbach trail when she sees that it has piqued my interest. According to her people get lost on it all the time, even ex-military people have recently had to be rescued: it's too hot, not enough water, too hard to follow the trail, etc... When she's done I'm about convinced to give it a try!

I select a campsite that's tucked away in the woods, no neighbors. I set up camp, make dinner, and prepare to go hunting for the sunset.