Poggstall to Jüdenberg: Scraping the pegs until the rain moves in 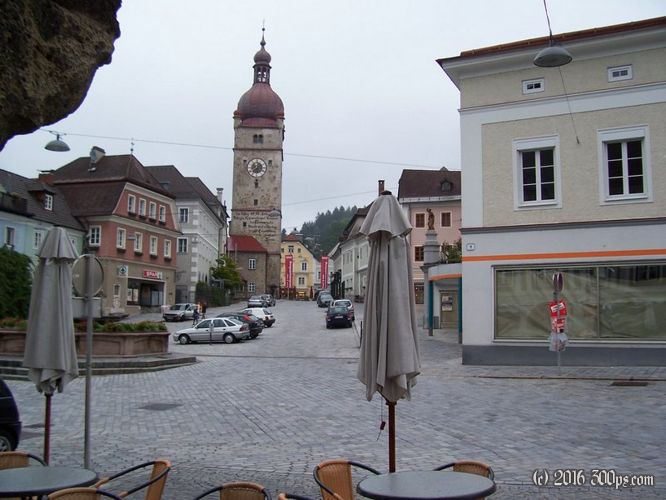 Good riding all morning. I get hooked up with 4 other Beamers in the mountains and we scrape the pegs for a good hour. I'm leading until we run up on a cop car; I don't dare pass it. They pass me and the cop like it's nothing so I follow. They drop off back at the Donau and I turn to the south. The sky is looking more and more menacing but I head for the mountains anyways. Bad move. I'm on top of a pass and it starts to pour. Can't see 15 feet in front of me, I'm white-knuckling my way through hair pins for a good 45 minutes. Come out the other side and rest under the awning of a gas station. Lots of other bikers, talk with a young Hungarian couple who say it's raining just as hard to the east. Get back in the saddle for another 30 minutes but when I arrive in Jüdenburg it's 3pm and I've had enough. I'm completely soaked despite rain gear. Get a guesthouse, strange owners. They don't seem like nice people.

After getting on the internet for a bit at a cafe I go to a Turkish restaurant to have dinner. When I'm done a guy comes in and starts razzing the Turkish guys, calling them terrorists and saying they can't shoot for shit. He's speaking half in English and half in German so I ask him in English what he means about the shooting. Apparently someone fired an RPG at a US marine ship off of Jordan. Turns out this guy is a welder from Framingham, MA, who has lived here for 14 years. He met an Austrian au-pair girl in Framingham then married her and moved over here. He's a real character, pure "chowdah-head" with a vicious Boston accent, even in German. Lots of stories about Austria and getting into trouble with the locals. He's getting divorced and lives in the back room of a friend's office who has a security company. We hang out all night, he drives me around and shows me the local towns. He says he shipped two Harleys over 5 years ago with Cobelfret out of Antwerp, he gives me the number. When I call them a few weeks later from France they don't ship bikes to the US anymore. Later that night we meet up with his friend who has the security company. On his office wall he has pictures of himself with Nena (the one who sang 99 Red Balloons) and other German pop/rap stars. He is a professional bodyguard, and cultivates an air of thug. When we are out at a restaurant with him and his girlfriend, his Doberman is running crazy through the place wreaking havoc but nobody dares say anything to him. He doesn't speak much English but compensates by saying "fucking" every other word. He asks me when I'm leaving; I say tomorrow; he says good. He says it as if I were going to muscle in on his territory or something. He doesn't like it when I burst out laughing but give me a break; does he really think I'm going to move to a small Austrian city and open a bodyguard business? Or attack an 80's Austrian pop star?