Narbonne to Barcelona: Side-trip to Spain (in a car). 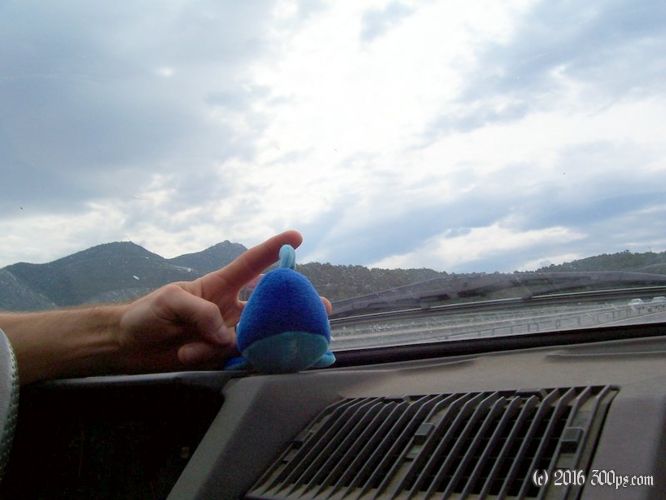 Get on the road around 9:30 in the Seat. Top speed of 110kph on the highway, above that it starts shaking like mad and feels like something is going to fall off.

Jonquiera, Spain just across the border; an ugly place, apparently known for its brothels. Toll outside Barcelona is 9,70 Euros. WTF? Few wrong turns, get lost, finally find Rambas. Parking garage with the tightest spiral turns I've ever seen. I make it down two levels then have to turn the Seat over to Brad.

Wander around the gothic quarter looking for Plaça del Pi. The place that was recommended to us is full, and so are about 5 others in the area. On a beautiful square Place Reial we find a spot. Room with high ceilings, french doors that look out over the square for 50 Euros. Get dinner, pizza, lomo con patatas, seiches. Hang at the cafe on the square for a while, tons of people, street performers. Go back and catch a nap for an hour.

Rendez-vous 22h with Meite at the Metro Barceloneta, along the waterfront. She shows up with another couple. Go to a Tapas restaurant in Barceloneta. Maite had made a reservation but now they say they won't accept reservations, some haggling, get seated in 10 minutes. Yolanda joins us. I spent a while shooting the breeze with the guy who is a telecoms engineer, did an MBA at Escade? then did an exchange program at Babson. They're speaking Catalan between them, I can only catch a few words. Tapas seichase, anchovies, patatas, jamon, cheese, sangria for them and agua mineral con gaz for me.

Is there some odd sense of humor among bottlers of carbonated mineral water in Spain? Two names we have seen are Vichy Catalan and St. Narcisso. Not bad for names. After dinner the couples leave us and Maite, Yolanda, Brad and I head for the night clubs. On the beach there is huge stretch of nightclubs filled with people. We hop from club to club and dance. Some strange characters are out. Some beautiful ones as well. Apparently this week was fashing week in Barcelona, must be why. In the last club around 3am I see one of the most beautiful women I have ever come across dancing up on the stage. Ça fait plaisir. Maite and Yolanda have that Spanish dancing style... Pass me the bottle Mr. Jones.

We drop off Yolanda in Barceloneta and Maite gives us a ride back to Place Real. The quaint square has transformed itself into a dirty, dark spot crawling with drunk people trying to get into the discos in the corners of the plaza. It is now 4am and I'm beat, I can't hear the noise I'm so tired. I fall straight to sleep.

Wake up at ten and even though I didn't drink, I have a vicious hangover. Getting too old to be out until 4am. Breakfast at the cafe with Brad and Bert. Walk around, see the Barcelona Cathedral, square with an orchestra and old people doing some kind of square dance on their tippy toes. Pretty cool. Get the car out and head for France. Burning car on the other side of the highway, waved through the border, Narbonne at 3pm. Dinner and laughs, I'm punchy I'm so tired. Pack for tomorrow, wash the bike. I'm off early to shoot for Germany. Lyon is 400km, Germany must be around