Disentis to La Chambre, France: Kid in the candy store. 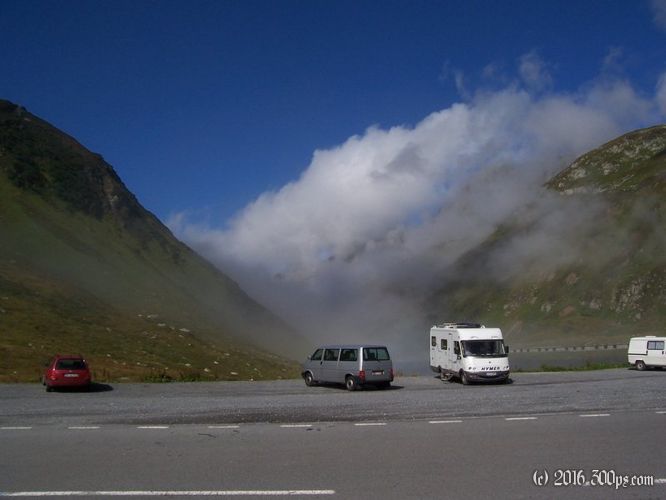 It's overcast in the morning. I'm apprehensive about going over Andermatt in bad weather, but when I get through the clouds at the top of Oberalpass things are looking up. In fact this turns out to be one of the best riding days of the whole trip. Non-stop passes all day: Oberalpass, Andermatt, Furkapass, Grimselpass, Nuffenpass, Chamonix - Mont Blanc. The roads are unbelievable. I ride hard all day long. I don't really feel like dealing with another language so I decide to stay out of Italy; instead I go back through Chamonix even though I already did it in June.

At the end of the day I'm back in La Haute Savoie but I stay closer to the eastern French border this time, heading south back down towards le tunnel de Frejus (which is open now, they've fixed the fire damage). Some great roads that remind me of the Parc de Vercors with the roads cut from the rock of cliffs. Around 7 I land in La Chambre and see a sign on a pub saying rooms for motorcyclists only. That's me! The place is called Pub 171, run by a French couple in their 50's. The walls are covered with old motorcycles and American-western memorabilia. I talk to them for an hour or so about their business, my trip, etc... Long discussion on the 35 hour work week and how it has changed the way people vacation. They think it has had a big negative effect on their business because people take shorter vacations more often; and they have less money to spend on trips because they are working less.