Mosjoen to Narvik: The Arctic Circle, and a minor wipeout. 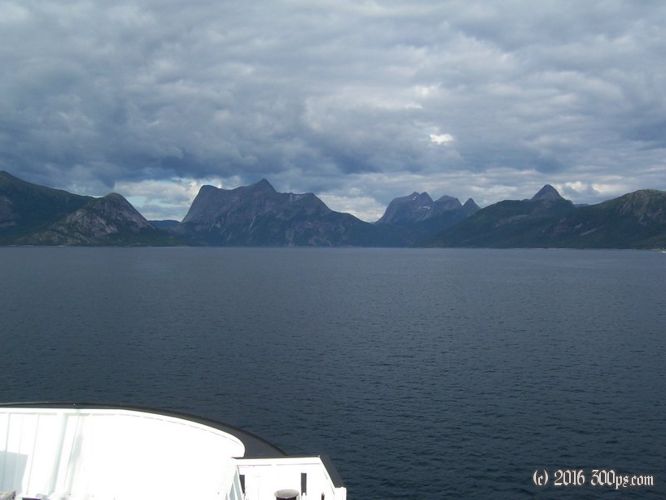 Early breakfast, didn't sleep so well. I’m far enough north that the sun doesn’t really set anymore; my body just doesn't want to sleep even though every place I stay has thick shades to block out the light. That combined with eight to ten hours of riding per day is making me more and more tired. Too much coffee and too many cheap Spanish cigarettes aren’t helping either. It all adds up to a slightly hysterical feeling that increases the closer I get to Nordkapp. To start it’s cold but sunny. I’m wrapped up tight with the leather fitting snugly to keep out the wind; in the morning it fits perfectly before the twisting and turning loosens things up. The K75 feels perfect. There’s a temperature where the power feels just right, when it’s too warm she struggles to come out of the turns with enough speed.

Midmorning finds me at the top of the mountain overlooking another fjord. Even though I’ve eaten I’ve got a hollow feeling in my stomach that’s been growing the farther north I go. It just ocurrs to me that it's not about hunger. I’ve never seen a more beautiful landscape. Around the edges of the fjord the water is pale blue, almost silver, away from the shore the color turns to dark blue flecked with whitecaps. Snow capped mountains stretch as far as the eye can see in every direction. Maybe it's road buzz and too much caffeine but the scene is so beautiful that I feel tears trying to fight their way to the top.

Some rain moves in. The weather can change at the drop of a hat here.

Halfway up Norway is already a long way from anywhere. Even in July there is snow on the sides of the road on the mountain passes and the wind is cold. The trees are thinning out, it feels like I’m on my way to the end of the world - which I am - quite literally. Another four hundred kilometers brings me to the Arctic Circle and its fields of little rock piles left by people trying to tell the universe that they exist.

Meet some English bikers, one of them is on an '82 Norton Commando, kick starter and everything. He has balls to be driving that thing all the way up here. If it breaks down he'll probably have to cash in his retirement plan to get it fixed. I see the Japanese guy again, taking a picture of himself with a tripod. From this point on I will see a lot of the same people over and over. There is only one road to Nordkapp and everyone is on it. Feels kind of like a race.

Great scenery for the rest of the day and finally get some sun. Ferry to Narvik, the English guys are on the ferry, chat with them for a while. Afterwards we ride hard to Narvik, Finnish couple on a Japanese bike, two Beamers and me. Great road and we're flying. People drop off one by one and I'm alone by the time I get to Narvik. Hostel has moved, in a hotel now. Another hot receptionist. Joke about getting a toaster as the grand prize, I explain to her what a toaster is. The Japanese guy shows up later on. He is planning on riding to Nordkapp then down to Turkhu in Finland, boat to Stockholm, then boat from Bergen back to Newcastle. The Brits took the ferry from Newcastle to Bergen as well.

Before one of the ferries I pull off the road too quickly, the front wheel starts to wobble in the gravel, then I fall over. Greta is ok except for a nicked airwing on the left. I've broken so many of those things it's getting comical. Getting her upright takes some serious effort because she fell pointing downhill. A local guy stops to help me. I'm not sure I could have done it on my own in this case. The motorcycle weighs 700lbs dry with no luggage. (I know this because I had to weigh it before I brought it to Lufthansa to fly over).

Only three of us in the dorm so I sleep well, which is fortunate because tomorrow will be an adventure.