I spend the first long downhill section trying to guess, from the appearance of the sand, which type of surface will hold the weight of the bicycle. Periodically I guess wrong... 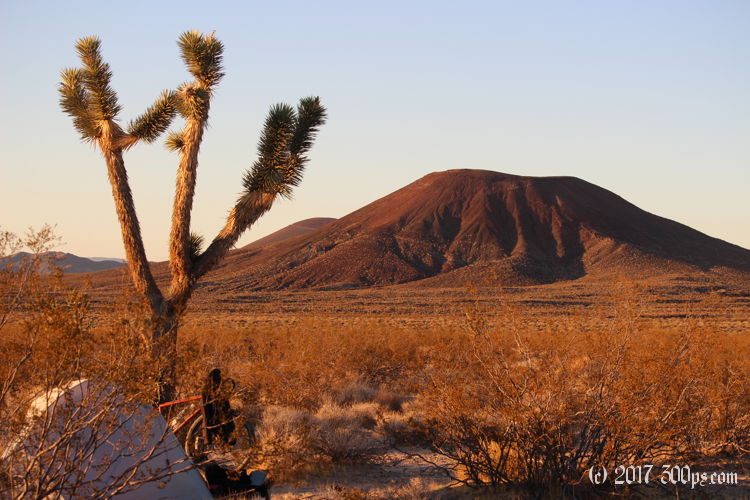 I awake before dawn to the sound of coyotes yelping. They are a constant presence when I camp but I still haven't seen one on this trip. It is cold this morning, I get out of the tent at first light regardless, just have to wear my fleece jacket.

I've got a little over a liter of water left (plus that liter of nasty Rock Springs stuff I'm hoping not to touch), so the priority for the morning is to find liquids. Worst case scenario I will ride the 8 miles to Mid Hills campground which my map says has water. First I'm going to follow GPS coordinates that I got from the web of a possible water source on Mojave Road not far west of Rock Springs. These coordinates I noted haven't worked out very well so far but it's too important not to try.

With this one I'm in luck: it's a windmill-driven pump that feeds a cattle trough. There is a big storage cistern right next to the windmill so I don't have to go near the trough, thankfully. I fill all my bottles/bags which gives me 8 liters. This changes the calculus for the day, since I don't have to detour to Mid Hills I can take a more direct route towards Baker. I figure I'll camp somewhere within shooting distance of the town, just leaving myself an easy ride for tomorrow morning to get there. This is day 4 since I last bought food, I've got enough for dinner tonight and breakfast tomorrow, that will leave me tapped out on day 5 except for my emergency backpacker ration. Let's hope nothing unexpected slows me down...

I'm on Cedar Canyon Road for most of the morning. I run into a grader smoothing out the road surface near the turnoff for Mid Hills. That's good news and bad news, it removes the washboard but leaves a softer surface since no vehicles have had a chance to tamp it down yet. Since there is a lot of downhill coming out of this valley I have to ride the brakes and be careful of spinouts.

One last ridge then I get a look at the next valley. I've got a huge descent ahead of me, and to my surprise after a couple of miles I hit pavement. I recognize this place: it's where I stopped and turned around when I was on the motorcycle 3 weeks ago. I fly down the pavement. At Kelso Road I stop to take a break at a monument with a plaque explaining the history of Mojave Road. It provides a nice bit of shade from the sun which is high enough now to really feel oppressive. While I'm sitting there eating a snack two guys on dirtbikes come riding out of Mojave Road from the west. They stop for a chat, they've come from near Magic Mountain, stayed last night in Baker, and are on their way to Laughlin, Nevada; all off-road. Sounds like a blast to me. I get some good information from them about the state of the road (which is not good, as to be expected). I decide to try a road that my map shows further to the south: Utility Road. I ride a bit on the pavement down Kelso Road until I hit the turnoff for what looks to be an unused, straight line of a dirt path heading west. They are replanting creosote right on the road at the entrace so it looks like they are trying to reclaim the track and restore it back to nature. A sign at the start says no motorized vehicles, which isn't me, I decide to give it a try. I spend the first long downhill section trying to guess (with mixed results), from the appearance of the sand, which type of surface will hold the weight of the bicycle. Periodically I guess wrong, sink into the sand, and spin out. When the uphill starts I'm doing more pushing than riding, the sand is too thick. A few hours of sweaty struggle later, I reach Kelbaker Road. It's paved and will evetually lead me to Barstow. Not today however. I've got a long slog into the wind up over this mountain range. I pump the tires back up and snail my way west. I'm actually enjoying fighting the wind, compared to what I've been doing the last few days dealing with wind on a paved road feels like a first-world cyclist problem.

Over the ridge at last, I start coasting down a long downhill on the backside of the range. I'm running out of daylight and I need to pick a place to camp but I can see some cellphone towers on a mountain to the south. I keep checking my phone for signal -- the towers are aimed at I15 so I need to get west enough to be in ther sights -- until I'm assured of having a few bars of service for the evening, then I head off down a dirt road called Aiken Mine Road to camp next to a Joshua tree. .

I fry up the last of my onion, garlic, and salami over rice. That about kills the my food store except for the emergency backpacker pouch and enough peanut butter to have a small snack in the morning. I'll be happy to get to Baker tomorrow to get some supplies and surely a nice, big breakfast. I fall asleep dreaming of eggs over easy and bacon.