Crabtree Falls to Asheville: Kings and queens and guillotines 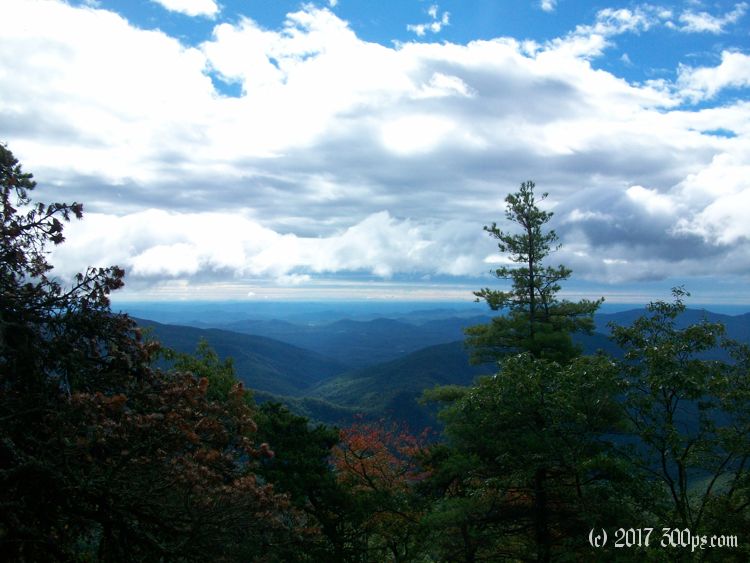 Right out the door of my tent the road just goes straight up. I'm feeling vaguely insulted by this parkway that just won't stop climbing before I've even had a proper breakfast. The touring cyclists are back, telling me how big the climb is. Stop! Please! I don't want to know! They say at the top of the climb there's a side road that goes even higher than the parkway up Mount Mitchell, apparently the highest mountain in eastern North America. They're just full of bad tidings, these touring people.

I spend all morning grinding up this continuous climb in my granny gear. The sun is out and it's hot, the sweat from my face pitter-patters on the plastic map bag strapped to my sleeping back on the front rack. A sign of how far I'm leaning over the handlebars today. I've got Aerosmith on my music player for motivation. Kings and queens and guillotines.... The effort plus the music inspires delusions of grandeur, but I'm not going to be famous for this endeavour surely already accomplished by thousands and thousands of other cyclists. Leave me with my dreams, it keeps me pedaling instead of giving up, after all. Dream on, dream on, dream until your dream comes true...

No laurel wreaths, podiums, or bimbo kisses at the top. Just a candy bar from the tourers' support truck guy and a long rest next to the parking lot. This is the last I'll see of the tourers, the Mount Mitchell summit marks the end of their journey. At least I've got a long downhill to Asheville to look forward to. I've already decided I'm getting a motel room tonight -- I'm just too nackered to face the prospect of camping in the woods with no shower.

The weather looks threatening again on the long descent but I only get short bursts of rain, then the sun comes back out as I near Asheville. I like Asheville. Been here a couple of times before; kind of funky for a southern city, lots of off-beat to it kind of in the vein of New Orleans. I get a motel and treat myself to a "Mexican" restaurant called Guadalajara though I'm chagrined to find that they have no tortas ahogadas. How can a self-respecting restaurant that calls itself Guadalajara not have tortas? I go for quantity rather than quality then collapse into bed early.