Taipei to Bangkok: The joy of flying with a bicycle 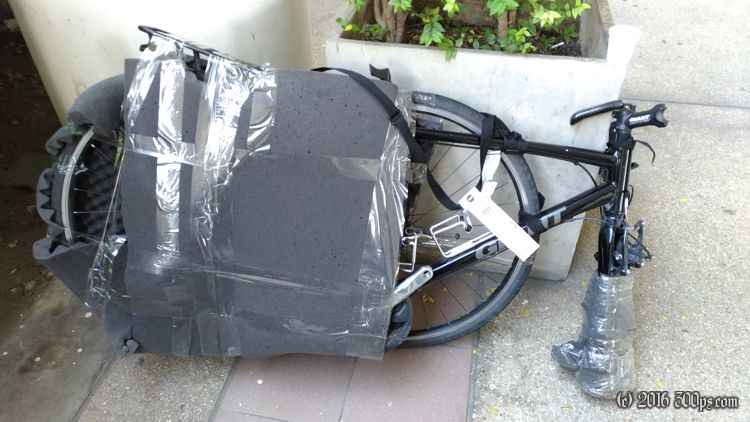 Every time I fly with a bicycle I tell myself: never again. Yet here I am, dragging a bike to the airport. In a bag this time instead of a box...we'll see how that goes. The airline I'm flying with pitches itself as "bicycle friendly" and says bags are fine, I'm sceptical but if ever there is a time to try it, it's now with my fully-amortized 250-dollar Giant that already has 3,500 kilometers on it.

I wrapped most of the bike in foam, strapped the front tire to the frame, put in a fork guard, and slapped a bicycle bag (purchased from Giant) over it. That's the extent of protection.

I book a hotel close to the airport because I've got an early-morning flight. I immediately discover the advantages of the bike bag over a box: with the carrying strap I sling it over my shoulder and can easily walk with it plus my other bags. Then it slides effortlessly into the back seat of a not-so-large Uber car. A box is a nightmare to carry and it never would have fit into the car.

Early next morning, quick taxi ride to the airport, again with no issues. I hand over the bike to the ticket agent with scepticism. The baggage guy behind the counter says don't worry, we'll take care of it. I pray that is the case.

3.5 hour flight to Bangkok, no problems getting through immigration although I was slightly worried because my onward-travel ticket is in two months, while Thailand only grants 30 days visa-free to Americans. The immigration agent doesn't even ask me for proof of onward travel. At baggage claim I retrieve my suitcase. The bicycle doesn't come out on the conveyor belt so I ask a security guard what the deal is. She reappears with a guy carrying the bike: a quick inspection shows no damage! What a relief, they really did take care of it. One of the flight attendants is waiting next to me to file a complaint about her squished suitcase that looks like someone dropped it off a 10-story building... maybe I just got lucky. At any rate the airline is Nokscoot, they claim to be bicycle-friendly, and in my case at least they certainly were. I pick up a SIM card for the cellphone on the way out of the airport: 699 baht (about 20 dollars) for what they say is unlimited data. A little sceptical there as well but what the hell I'm on a roll today.

Now the fun part: re-assemble the bicycle and pack all my stuff on to it. It's hot here, I get to work in the heat dressed in jeans. No place to change while carrying all this stuff. 20 minutes later I've got it all back together with gear loaded. As I wobble down the road one thing is immediately apparent: I've got way too much stuff. Some tough decisions will have to be made, but for now the goal is get to the hotel and regroup. The airport road is very busy and I'm nervous about riding on the left. The SIM card is a brilliant first purchase, Google maps directs me right to the hotel with no wrong turns. Relieved that today turned out okay.