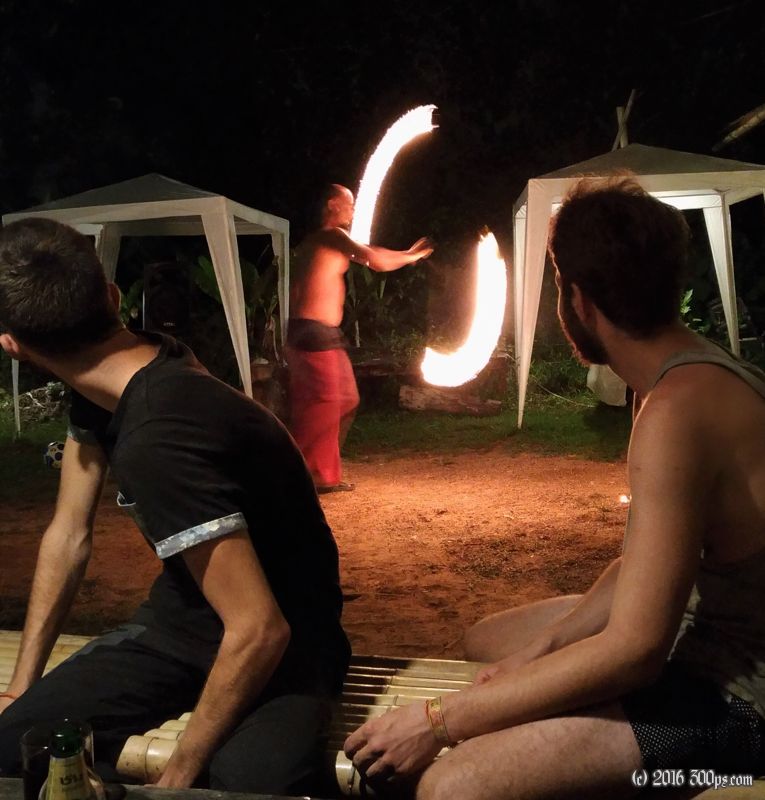 Back-to-back 155 kilometer days in the heat. Switching coasts in one day, from east to west, ending in a bungalow complex full of French people. Late night speaking French; complete with flaming sticks, guitars, Thai take-out food, and lots of cheap alcohol (for them).

I have to ride a long way to get breakfast. By the time I find a place next to the highway I'm completely famished. The staff claps sarcastically after I finish my plate in about 2 minutes. I break off the highway after the city of Surat Thani and head west. It's really hot in the interior...

I reach some fairly large town around 2pm. I have a dilemna: it's too early to stop, and I really don't want to stay in this town, but there's a 60 kilometer stretch of nothing before I get to the next population center. I already have 90k on the odometer for the day, it's hot, and I had a 155 kilometer day yesterday. The smart thing to do would be to suck it up and stay in this town. I'm not smart. I go for it, riding as fast as I can, stopping only to buy and chug water (which I have to do a number of times, it's a 6-liter kind of day).

When I get closer to civilization I book something that looks kind of interesting, bungalows that are cheap, the reviews say party atmosphere but what the hell, I could do for some human contact. When I get close I know I'm in trouble. The GPS coordinates are leading me down two-track dirt roads through forests. I have visions of another one of these bad coordinate nightmares I've already experienced a few times. I arrive at the house and it clearly isn't the place I'm looking for. A guy out front gives me a knowing look and motions for me to follow him on his scooter. He leads me back to an intersection with a few houses and people hanging around out front. They say stuff to me but no one speaks a word of English. Finally a girl hands me a phone number written on a piece of paper. I call it, tell the guy I'm lost, he says where are you...haha like I know. I can't ask these people so I just hand the phone to one of the girls and I guess she explains to him what's up. Ten minutes later he arrives on a scooter. I follow him back out through the forest to finally arrive at the bungalows. And bungalows they are.

I spend the night hanging out with a bunch of French people, all Bretons execept one guy from Alsace. We order take-out and talk the night away. They're hitting the cheap whiskey hard and chasing it with weed. Knackered as I am, I make to 1am before I crash in my bungalow. Long day that ended on a high note.