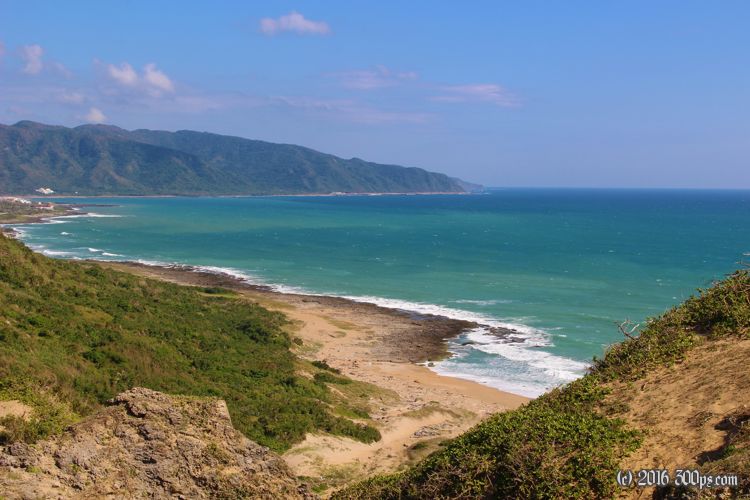 From the hotel in Kenting we ride south to round the tip of Taiwan. The brief section of the east coast in Kenting National Park doesn't disappoint: pristine beaches and turquoise waters framed by distant mountains. Then we cut across back to the west coast and head north into a stiff headwind. 100 kilometers of urban overdose ensue, broken up only by the comic relief of trying to order a lunch of chicken at a barbecue place. The customers get a kick out of us, grimy and sweating, trying to negotiate a full chicken with nothing but chopsticks. One guy even takes a (not so) surreptitious selfie with us in the background.

It gets surreal when we ride into the area where the hotel is located. It turns out the hotel is in some kind of Disneyland-type amusement park called "E-DA Theme Park". One of the guards tries to stop us from riding up to the hotel entrance, he probably figures two dirty and sweaty cyclists with bags on their bicycles can't possibly be staying at the hotel. He relents when we tell him we have a reservation. When we get to the door their is another comical moment of confusion while the porters and concierge try to figure out what to do with the bikes. They have to call their supervisor to make a decision. I suppose 5-star hotels don't get many bicycle tourers. The hotel is plush, it seems absurdly incongruous given the way I'm used to traveling by bike, but what the hell it was relatively cheap. We get hit with a $30 US bill for eating at the restaurant, but I get my revenge by ravaging the buffet. Two plates of desserts even... I feel slightly queasy when we're done.