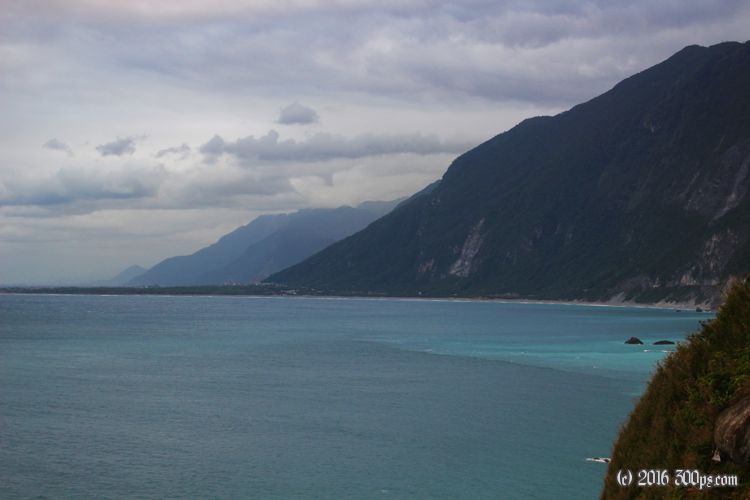 First day of riding is typical of Taiwan: hot and humid, beautiful scenery, rain, more beautiful scenery. We start out on the train to avoid the long city-ride out of Taipei, taking the local down to Su'ao township, just past Yilan on Taiwan's eastern coast. There is a moment of panic at the train station when the lady at the ticket counter says we can't take fully-loaded bicycles on the train, but after some investigation we find out that that policy only applies to the fast and regional trains (they will take disassembled bikes). We can take the bikes on a local train which will be a slightly longer ride but certainly worth avoiding the hassle of taking apart and wrapping the bicyles at the last minute.

Since we are leaving Taipei during rush hour it's a bit of nightmare fitting the bikes in the train among the commuters. As we get closer to Keelung the crowd thins out and we can prop the bikes up against some seats and sit down ourselves. We originally had tickets for Yilan but see that Su'ao is closer to the coastal road so we pay the conductor the difference to go the extra few stops.

After a quick lunch of corn soup and potstickers in Su'ao we are on the road; the climbing starts immediately. The threatening sky finally delivers its punch a mere 15 kilometers from Su'ao. We hole up at Budhist temple for a couple of hours to wait out the downpours.

There are a whole bunch of tunnels today, maybe 10. They are a bit stressful, especially when trucks are passing.

It's dark when we come out of the tunnels to Chongde, a town which seems to be without hotels. Further up the road in Xincheng we get a good deal at an upscale hotel; big dinner, shower, lights out.