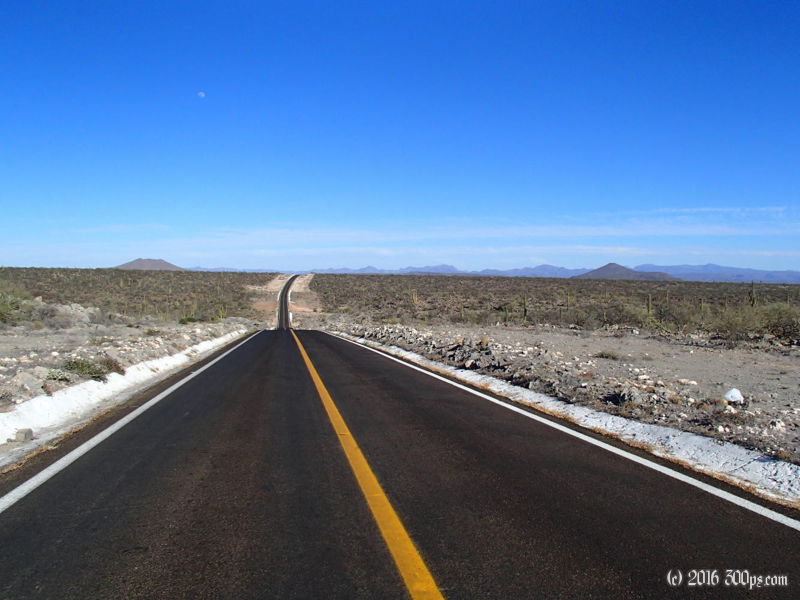 I awake in a foul mood. It only gets fouler when I discover that the rear tire is flat. On getting out of bed my plan was to pack up the bike and ride it in search of breakfast, now in the interest of not feeding the gathering thunderheads in the motel room I say the hell with it and depart on my breakfast quest on foot. A few blocks away I locate a restaurant, order some coffee and huevos rancheros, and sit stewing in my bad humor. I am rescued by an American sailor named Mike who wanders in asking if there is coffee. Affirmative, but not very good I advise him. He sits down at my table and asks me what I’m doing in Santa Rosalía. I fill him in with the usual details. He has sailed here across the Sea of Cortez from Sonora in a 24-foot S2. It turns out he is a priest and spent 7 years in the Mongolian outback doing missionary work. We have a few things to share. I finish my eggs, he finishes his coffee, and by the time we shake hands goodbye outside the restaurant I am feeling upbeat again.

I pack up, turn in my keys and remotes, and wheel the bike down to the local Starbucks rip-off for a coffee to go. Last stop in town is a vegetable stand where I pick up a jicama. When I go to pay for it the 12-year old kid manning the till says I have to weigh it. Since I never got off the bike and don’t plan to, we are in a stand-off as the scale is 3 meters away between myself and the kid. I make a motion that I’m going to throw it to him. He panics. He is obese, even at his young age. I can see that he is awkward, unable to manage his unwieldy body, and the idea of having to catch a jicama clearly has him flustered. I say it will be ok and toss it to him. He bobs and weaves trying to line up the catch as if the game depended on it. He does grab it but nearly takes out the cigarette stand in the process. He weighs the jícama, tells me the price, and I leave the money on the counter. He gives me a smile like he’s happy that he just did something he didn’t think he could do.

The headwinds are strong as I ride out of the city. About 5 kilometers out the road swings west into the mountains, leaving the Sea of Cortez. The grades are steep. The climb is hot when the mountains are blocking the wind. It takes me a few hours to climb over this range, in the process a slew of touring motorcyclists pass me coming in the other direction, usually with a wave or a friendly beep. Riding a motorcycle down the Baja would appear to be a popular activity.

At 50-something kilometers I run into a pueblito with some stores and restaurants. I think that this is San Ignacio because of some signs near Santa Rosalía that said it would be 50-ish kilometers to that town. I stock up thinking it will be the last chance for the day, I leave with 6 liters of water plus a liter of coke. 20 kilometers later I arrive in San Ignacio. Those devious Mexican road sign makers have flummoxed me again…if this is San Ignacio, where was I 20 kilometers ago? My map offers no clues. I don’t need anything so I keep going. A sign says the next town is 68 kilometers away so I reset the navigator on the VDO to keep track of that distance, chuckling to myself as I do it knowing that it will mostly likely be an exercise in futility. A few kilometers later I arrive at a military checkpoint. I chat with the young soldiers manning the barricade for a few minutes. They are from the 4 corners of Mexico, making the best of what must be an extremely boring assignment out here in the desert. Buena onda.

I start running out of gas not too much later. It’s 5 o’clock, time to starting scoping out a campsite. My first attempt in a quebrada ends in failure because it contains nothing but rock with no place to pitch the tent. I have better luck when I turn down a dirt road a little while later. I set up camp in a stand of cacti, being careful to carry the bike past the picket line of flat-inducing plants. Dinner is once again a success. I’m about out of food so I will have to make a stop in that next town that is now allegedly 50 kilometers away. I use a 1.5 liter bottle for cooking plus a cup of coffee, I drink another 2.5 liters of water plus the coke I had, which leaves me with 2 liters of water for tomorrow morning. Liquids go fast in the desert. I’ve been giving them back to the cacti all evening.

The moon is bright, the breeze is keeping the bugs away, and I am free to enjoy the solitude of the desert once again. A good end to a day that started off on the wrong foot.