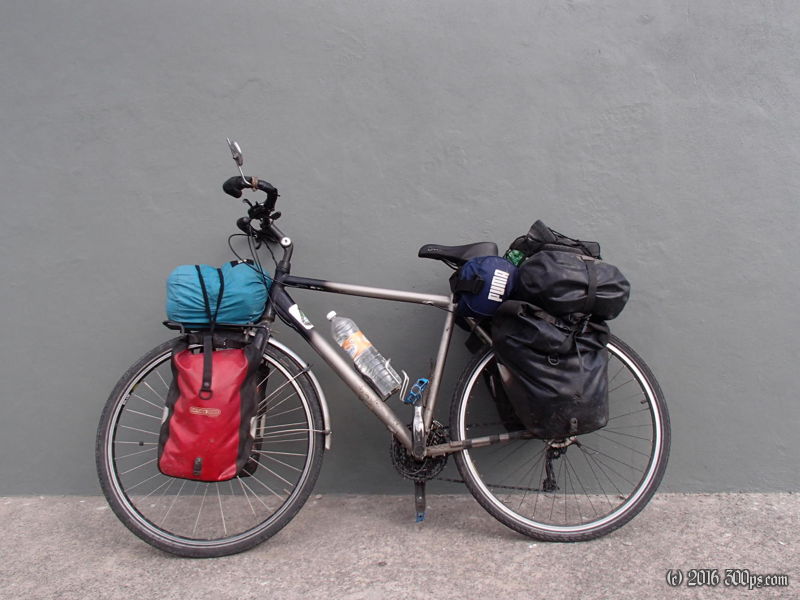 It was downright chilly this morning before the sun got high enough to warm things up. No rain clouds in sight today. I knew I had a fairly flat highway ride in front of me so I dragged it out to make it last all day. I must have stopped at 5 or 6 Oxxos (like a 7-11) during the day; for coffee, for pastries, for Snickers bars, just to take a lot of breaks.

In Ocotlán I stopped for breakfast: a plate of eggs, chilaquiles, refried beans, and salad. I had been here once before back in 2010 with a German woman I was dating at the time. I was on the bicycle and she was traveling by bus, I would ride to the next town and she would grab a bus and thus we made a circle around la Laguna de Chapala staying one night each in Ocotlán, Chapala, Ajijic, and some town on the south shore I can't remember the name of. We had spent the prior week in a communal-living village in the mountains nearby where a Huichole medicine man came to do a temazcal (sweat lodge) ceremony. I didn't participate because the process involved taking hallucinogenics, but the German woman was into it. While they were having the multi-day ceremony I built a big bamboo fence around the communal vegetable farm. When the ceremony was over with I remember she had that wild-eyed, distant look that people get from taking those drugs. I was much happier to build the fence and keep my wits about me.

My Oxxo delaying tactics worked perfectly, I arrived in Guadalajara as the sun was getting low on the horizon. I rode around in the centro for a while to see some of the old places where I used to hang out, then headed up to Chapalita. It's good to be back.