Northwest edge of Salar de Uyuni to Isla Incahuasi: Another salar and a run-in with some local ruffians 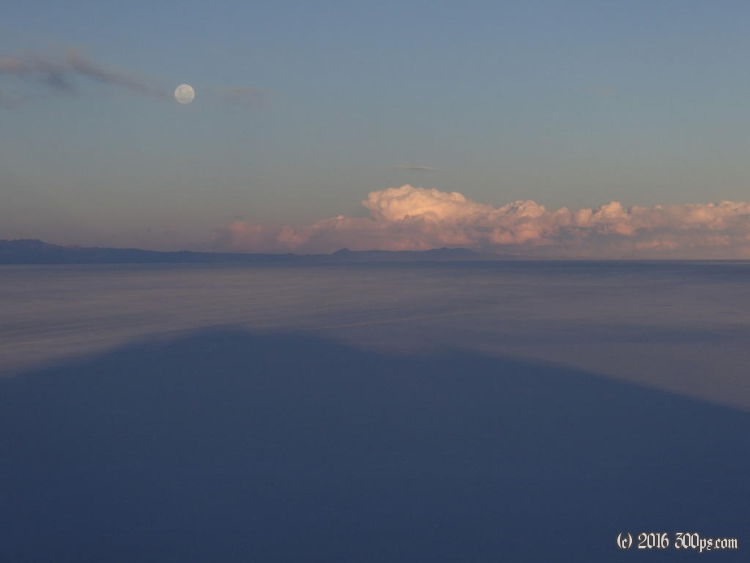 It was freezing cold waking up on the salar, as to be expected. After assessing my water situation I realized I needed to go back to Llica to stock up. I was in town at 7:30 and was surprised to find the stores already open (I´m not in Argentina anymore). As I was walking around an elderly woman with a 4 or 5 year old chile walked past and said to the kid: be careful or this gringo will take you away. I said to the kid: yes I will take you to a place where people speak to each other with respect. Ignorance is international. The woman looked shocked, she wasn´t expecting me to speak Spanish.

I picked up water, a soft drink, and some bread and sheep cheese. When I was walking to the square to eat some of the bread and cheese a group of Jehova´s Witnesses came over to me. I was thinking here we go but they turned out to be really cool. They gave me some advice on how to navigate the Salar de Uyuni and which spots were to be avoided due to softness of the salt. I got the requisite pamphlet on some religious theme (which I didn´t read).

It was a 10 kilometer ride to the salar onramp. I rode most of it on the salar anyways to avoid the road which was terrible. The onramp points right towards the first island. From there it was a 50 kilometer ride on hard salt with bumps and other irregularities but it was a huge improvement over the roads around here. Some headwinds slowed me down a bit. I was surrounded by whiteness broken up only by a few islands off ahead of me. I had to put the mp3 player on to distract myself because riding on the salar is like a strange form of sensory deprivation; because everything is white and uniform my mind was getting fidgety.

I reached the island around 3pm. I put the bike down and walked around for bit on the "beach". It is a strange sensation to be in a landscape that looks exactly like the ocean only it isn´t. The beach could have been any seashore. I was quite tired, probably from all the effort yesterday, and I was considering just setting up camp here.

While I was walking around looking for possible camping spots I noticed a motorcycle parked up on a ridge 50 meters away. I turned around and walked back towards the bike, then I heard someone yelling. I looked up and a guy was waving to me from up on the hill. I waved back and continued on. I could see the guy get on his motorcycle and ride away east on the salar. I decided to check out the other side of the island so I got back on the bike and back onto the salt, but before I could get to the other side of the island the same guy was back, only this time with another guy riding behind him. They came up to me and started asking me questions about what I was doing and where I was going. I told them then asked what they were up to out here. The driver said that he was the owner of the salar and that I had to pay for visiting it. I laughed and said there was no charge for visiting the salar. He insisted that I had to pay, that this was his island where he lived and everyone had to pay to visit. I said no again but with more force this time. I could see his wheels spinning, then he started whispering to his buddy, it seemed to me that they were thinking about mugging me. I said good day and took off, fortunately they didn´t follow me but then I got to wondering what to do if they came back. Out in the middle of a huge salt flat on a bicycle isn´t exactly a great situation to avoid people. There is absolutely no place to hide and people can see you from miles away. Well I definitely wasn´t going to camp on this island so I headed south to the next which I knew to have people on it.

Another twenty kilometers and I was at Isla Incahuasi. The island is a well-known tourist attraction service by jeep tour companies that ferry tourists out to see the salar. When I arrived I found a couple of the employees and told them what happened with the would-be extortionists. The first thing they asked was whether or not they were Peruvian. I remember this from living in Buenos Aires: whenever a crime is committed people´s first thought is to blame a Peruvian. Nope, they were Bolivian. The rangers were sympathetic but of course nothing could really be done. I just wanted some people to know in case they came back after me. At any rate the employees suggested that I camp there for the night, since they live there full time there would be people around and it would be safe. They said I could camp if I paid the regular entrance fee which was 30 Bolivianos. I didn´t want to pay (I´ve gotten to used to free camping, I hadn´t paid since Calama, Chile) but then I stopped myself and just coughed it up, it´s only 4 dollars after all.

When I first got there the place was hopping with backpacker types that had come out on jeep tours. I spoke with a bunch of them who wanted to know how I had ridden a bicycle there. Later I set up the tent and climbed the island´s hill to watch the sunset. Absolutely amazing. The moon was full and was already up while the sun was going down. This has to be one of the most beautiful places I´ve ever seen... no wonder it´s a big tourist attraction. All the tourists were already gone though, I presume because the jeep drivers want to be back on the mainland by the time night falls so I had it all to myself. There were lots of vizcachas hopping around (those rabbit-like animals I had seen up in the mountains in Chile).

When night fell it got really cold. I made a dinner with pretty much the last of my food while shivering.