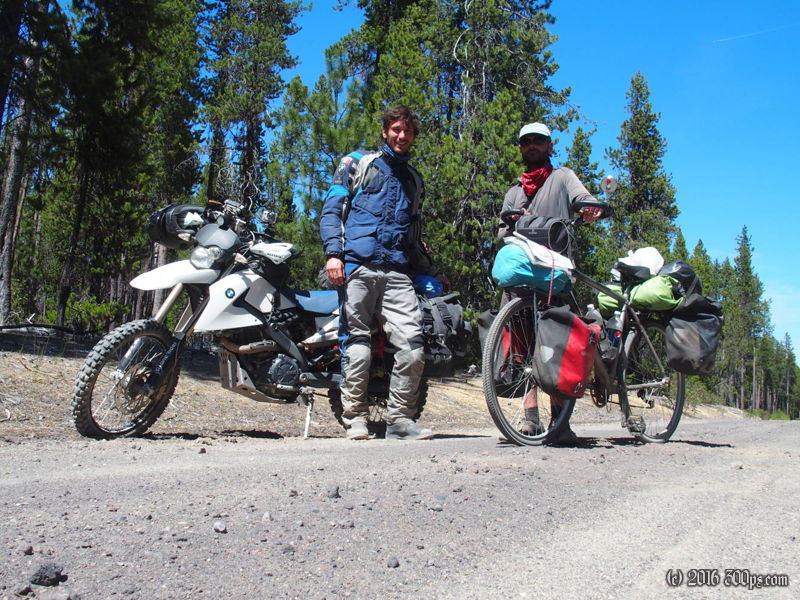 When I finally get going up the dirt road to Windago Pass I see that there are fresh bicycle tracks weaving back and forth that haven't been overlain with car tracks, perhaps they are from this morning. At the top of the pass I catch the other rider, his name is Paul and he is doing a loop through the mountains starting from the Oregon coast. What are the odds of running into another tourer way out here? He says his legs are shot from the climb and he's going to camp here at the top of the pass.

The descent down the north side is an obstacle course: fallen trees, big snowbanks, and mud. I guess this side of the pass doesn't open up until well into summer. Once I descend past the obstacles the problem becomes thick sand. I'm fishtailing all over the road to get down, but fortunately manage to not wipe out. When I'm off the mountain onto a flatter section I have the second unusual encounter of the day: Marc from Paris on a BMW dual-sport motorcycle. He has a fascinating story: he has ridden all the way from Atlanta, 90% on dirt roads, following a mapped route for motorcycles called the Trans-America Trail. I've never heard of it before (immediately the wheels start spinning, might be an interesting route on the bicycle!). We talk for a while about travel and the things we have seen. He is definitely having some fun, seeing lots of animals, landscapes, meeting lots of people and getting some good American hospitality. He reminds me of myself when I made my first break from the traditional work life: in 2005 I took a four month leave of absence from my job, flew my motorcycle to Europe, and rode from Germany to Nordkapp, Norway then all the way south through Europe to Gilbraltar. It's getting later and I need to move on, I'm pretty much out of food with a good distance to get to the next town for resupply.

I don't have a detailed map for this area so I don't hit route 58 where I planned. When I come out of the forest I think I'm north of the road that makes straight for Crescent, but as I ride southwest I realize that I must have come out to the south of the exit. This means a long detour to pick up 97 heading north, then eventually to Crescent. I stop at a grocery store in Gilchrist to pick up enough food for the night, just a few miles north of town I pull off into the woods to make camp. I spend a few hours on the phone with a friend during which I manage to set up the tent and campsite and even make dinner. I've set up camp so many times I could probably do it blindfolded... Dinner is a bit sad because I'm out of a lot of things but it does the trick.