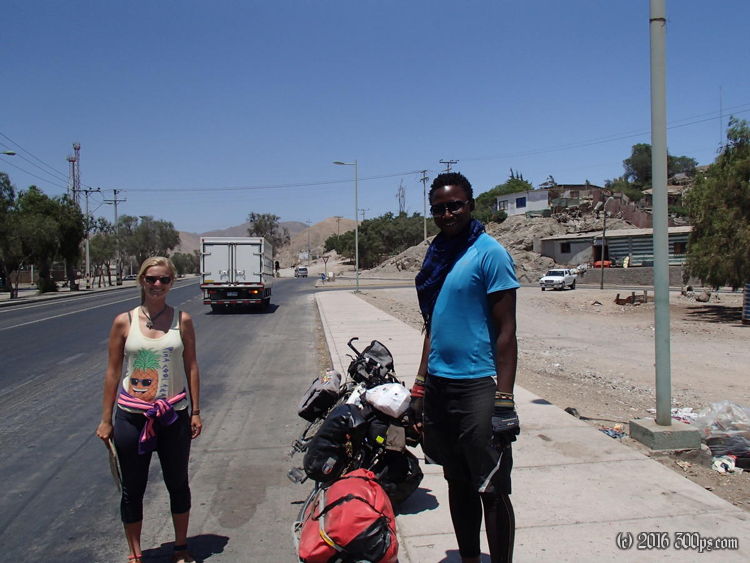 When I got up it was cloudy. That was a surprise. It even drizzled a tiny bit. The day was just about getting to Copiapó to get some things done, I only had 60 something kilometers to do. The wind was a lot less strong than yesterday so it went fairly quickly, there was some climbing but the usual gentle grades since I've been on this road.

As I was entering Copiapó I ran into Emelie (Belgian) and Gueye (French) hitch-hiking in the other direction with their tandem. The tandem also has a trailer on it which makes the whole thing quite long. When I asked they said it hadn't been a problem when hitch-hiking, if they get at least a pickup they take off the trailer and fit it all in. They started in Mexico city and have been on the road for a year and a half, here is there blog: http://www.milyandgueye.com/. They loved Bolivia and didn't like Peru, a lot of other people have told me similar things so I'm thinking about going to Bolivia after all. I was planning to head straight through Peru after returning from Argentina via San Pedro de Atacama but now I'm not so sure... we'll see, I'm sure the route will change again for some unforeseen reason.

I went to the main square to get some lunch, then found an hospedaje. When I was taking the gear off I discovered that the back rack was broken! That's the second back rack I've broken so far. After food shopping I went to a few bike shops, only one of which was open because it's Monday, to see if they had a rack. The ones they have are really cheap and would never survive the weight. I thought about it for a while and ended up taking out the bolts and sticking a tent stake down the tube that's broken. This will at least keep it straight, and hopefully it will hang in there a while longer.

I went to the carabineros to ask about Paso Pircas Negras, they said that it is open every day of the week and doesn't have specific hours like I had heard. I'm going to ask again when I get closer to be sure. The officer I spoke to said he is also a cyclist and had the tan lines on his arms to prove it. He asked if I was Argentine and when I told him I was American he asked if I was related to Lance Armstrong.