10 kms south of Río Loa to Chanavayita: The smell of the ocean 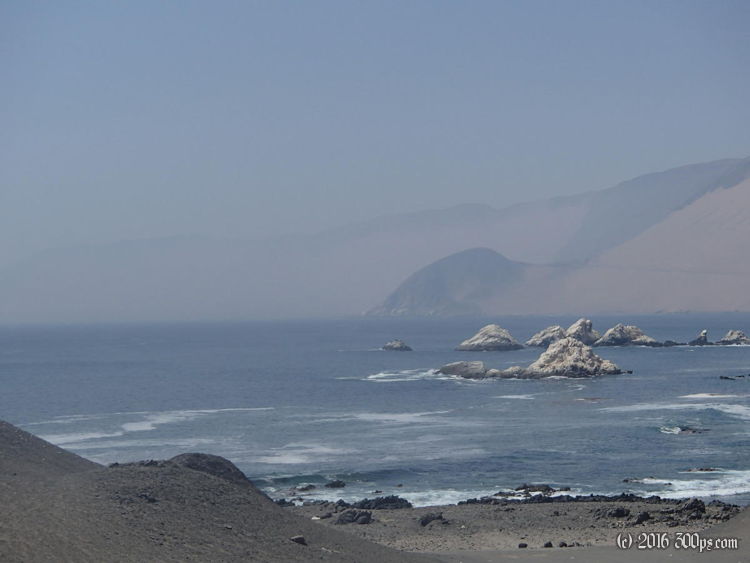 It took a while to drag the bike back to the road through the sand. A short 10 kilometers later I was at the customs checkpoint. Chile Region I is a tax-free zone so they have customs between Region I and Region II. They were not interested in the bicycle so I breezed right through. I stopped at the café there and got to talking with Gustavo from Santiago. He is riding a motorcycle from Santiago to Arica on the Peruvian border, visiting a lot of the abandoned saltpeter mining towns on the way. He said many of these towns were abandoned suddenly when they discovered a way to make it synthetically early in the 20th century. He had been to María Elena and agreed with my assessment that it was a strange place. He said it was the last functioning saltpeter mining town in Chile. He had lots of question about the bike and the trip, he gets very ill above 4,000 meters so he was impressed when I told him about all the passes I have ridden.

I saw a few more colonies of sea lions today. It's been hard to get good pictures because they like to hang out on little rock islands and it seems the sun is always behind them. The lizards come out every time I stop to see what's going on. I threw a plum pit down and one lizard was on it almost before it hit the ground. The other wildlife in abundance today were pelicans; amazing how they follow the crest of a wave in formation as they look for fish. The land here is completely dead, there is absolutely nothing growing, but the ocean is very much alive. I see people harvesting seaweed, divers out for shellfish, and fishermen.

I enjoyed having the smell of the ocean with me all day. It was very sunny but not too hot with the cool sea breeze.

After Punto Patillos a guy in a pickup truck slowed down next to me and asked where I was from in English. I told him then he offered me a ride to Iquique in the pickup. I said no, had to pedal the whole way. I was entering a flat area with more human activity... I was starting to think I had made a mistake in not stopping to camp at one of the deserted caletas when I saw a sign for camping at a town called Chanavayita. I pulled in, stopped at a store for eggs and bread, then rode down to the beach. I'm not sure exactly what they were referring to with that camping sign, I just set up camp a ways down the beach from where someone else was camping. Another great sunset.

Dinner was red peppers, onion, garlic, salame, eggs, reggiano cheese on rice with basil, paprika, salt, and pepper. I love it when I can find eggs at the end of the day. I never travel with them because they either break or cook in the panniers but if I can get them right before I camp, perfect.

Later I washed the pots in the ocean. As I was scrubbing a big wave rolled in and sent all my stuff flying - I grabbed what I could and through it back onto the beach. One pot got pulled back out into the water, I was damned if I was going to let it go so I dove in and grabbed it. I'm all wet but I didn't lose my largest titanium pot, that would have been a real loss.