I let it run, figuring that at least on this road if I fall and hurt myself someone will eventually be along to pick me up. I was more careful this morning when a bad wipeout might have been the end of me out there on that trail that probably only sees a few off-road vehicles on the weekends... 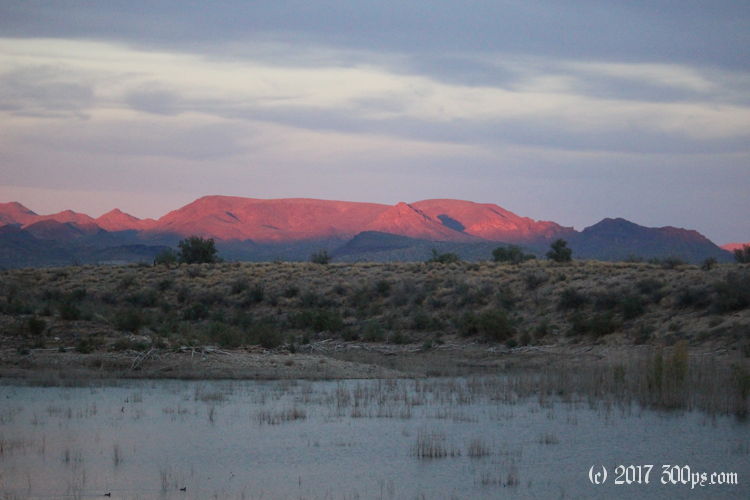 This county road 15 is a blast, a roller coaster of hard-packed dirt except at the bottom of some of the washes. For twenty miles I fly down a hill, skid over the rocks and sand at the bottom, try to use my momentum to get as far up the hill on the opposite side as possible. I'm really moving fast on these descents. I let it run, figuring that at least on this road if I fall and hurt myself someone will eventually be along to pick me up. I was more careful this morning when a bad wipeout might have been the end of me out there on that trail that probably only sees a few off-road vehicles on the weekends.

I seem to be losing elevation as I move southeast toward the lake, the 20 miles goes pretty fast. At least much faster than the 12 miles in 4.5 hours I did this morning. I reach a turnoff with a sign that says "Hoffmans". The people at Wayside Oasis told me that that was the place to go through if I wanted to get around the lake to the north. This road is a lot sandier than 15 so I slow down quite a bit. I see a house and a cluster of out structures. That must be Hoffmans. Here I turn right on a trail that's marked on the OSMand map as going down to the lakeshore. When I reach the "beach" I drop the bike, strip down, and jump in the lake. Water never felt so good. I arrived with just a few sips left in one of my bottles, the 8 liters I left the aqueduct with yesterday morning got me the whole way here thanks to the cooler temperatures, if it was still in the 90's it wouldn't have been enough.

I filter a bunch more water for the night, walk back up a hundred yards to a plateau where I have a view of the lake on both sides, and pitch the tent. Next up is collecting firewood. It would appear few people camp on this side of the lake, I see few traces, and I have to rebuild a very disused-looking fire ring. No way I'm passing on a fire tonight, the setting is just too perfect for one. Collecting wood is like shooting fish in a barrel. I just pick up driftwood lying on the embankment, probably deposited there when the water was high in the spring. I light up the fire, make dinner, and enjoy the sunset followed by the stars. Fighter planes periodically fly over. I see one of them drop a few flares... I assume they know what they are doing but it wouldn't be my first guess that firing flares over such a dry environment would be a safe activity to engage in.

I can see the lights from the campground on the other side of the lake, but I still haven't seen an actual person since that woman in the government truck near the aqueduct yesterday.