Cha-am: crazyguyonabike encounter, sketchy people, and a change of plans 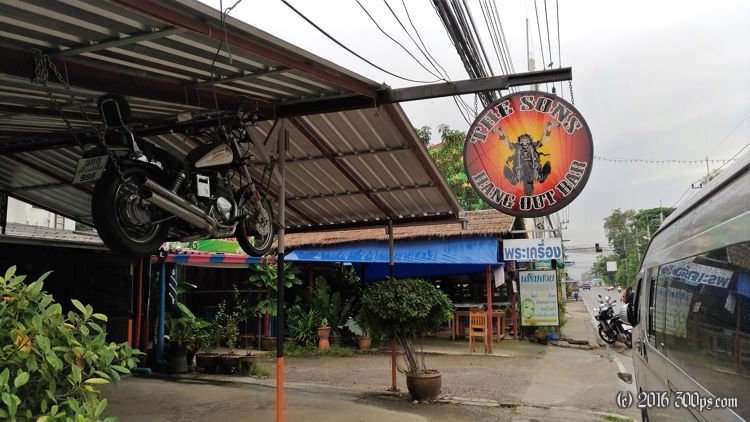 First off: change of plans. I was originally planning to go north into the mountains but not having camping gear has turned me off to that idea. I'm meeting friends in Singapore for the holidays, I had thought I would catch a flight down there from northern Thailand or Laos, but the flights are expensive and inconvenient. So I've decided to just ride south down the Malay Peninsula, getting to Singapore by land. Why not.

Next up: sketchy people. I go downstairs around 8:30 looking for breakfast. None to be found, however a group of retired-looking expats is hanging out at the guesthouse next door so I join them to see what's up. What's up is that they are drinking beer and Jägermeister shots and smoking cigarettes. I order an orange juice. The guy next to me is already incoherent. After a round of introductions, the guy across from my leans over and in a raspy voice honed by what has probably been decades of smoking says to me: "so do ya like whores?" I can't help myself, I burst out laughing. This scene at 8:45am is just too comical. Yeah, whores really aren't my thing. Neither is early-morning Jägermeister. I was planning on staying here a few days to maybe start learning Thai but I'm just not digging this atmosphere. They invite me to go to some girly bars but I find a place that has English breakfast instead. A quick ride around town afterwards convinces me not to stay here any longer than necessary. The rest of the day is consumed by the computer and a good nap. Late in the afternoon I meet another resident of the guesthouse down at the bar. Another colorful character, he buys me a plate of Panang pork. My first of two this evening. I decline the joint he hands me. Also the bamboo rolling papers that he swears are excellent. I believe you dude, I just don't have a use for them.

And finally: Jeff Kruys of crazyguyonabike.com fame arrives in town. We corresponded the last couple of days to arrange a meeting. I feel like I know him already from having read his blogs and having visited many of the same places as him in the Americas. Over Panang pork and rice (my new favorite Thai dish), we exchange notes on bicycle touring.