Ruta 7 km 1213 to Uspallata, Argentina: A mudbath, rain, and great balls of fire 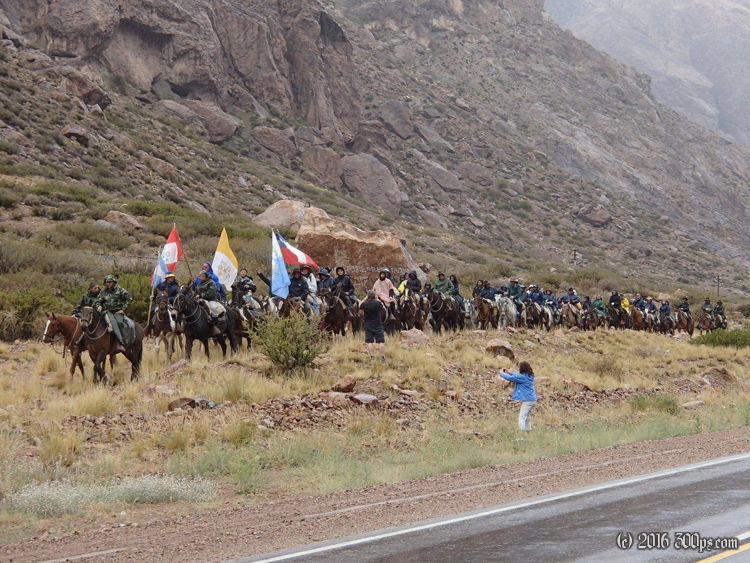 It rained all night. I slept in because I really needed the rest. I considered just crashing here for the day because no one would bother me but I didn't have enough food. I packed everything up and started walking the bike towards the road. The rain overnight had turned the area into a complete mudbath. Sticky, thick mud that jammed up the wheels and clung to my shoes like cement. I had to drag the bike to the road, by the time I got there all my stuff was covered in it and I was exhausted. When I got to the road I unclogged the wheels as best as I could then set off.

It rained all day, but never particularly hard. It was mostly downhill to Uspallata, over the course of the ride I climbed 332 meters and dropped a net 1,000 in altitude. The road runs down a river canyon with fantastic scenery. When I got to the town I stopped for a pizza and coffee, then went to the gas station to get on the internet. At the gas station I spoke to Eduardo from Buenos Aires for a while. He is with a group, 3 couples on 3 motorcycles, touring the mountains but returning to the same campground every night near Mendoza.

I headed to the municipal campground and got a spot for 25 pesos. The whole campground is mud as well. I gave all my gear a de-mudding and thoroughly cleaned the bicycle and drive chain. While I was working I was joined by two cute Paraguayan kids who peppered me with questions and told me all about their Donald the Duck doll and dinosaur. I had a long talk with Juan José from La Pampa. He told me it had been raining here for 5 days non-stop. He said the Dakar rally ended Saturday in Santiago, I had seen trucks carrying gear for the rally in the line while we were waiting for the pass to open.

Ok, in the interest of truth in journalism I will tell this anecdote, embarrassing as it is. If you are averse to discussions of private body parts, skip the next paragraph.

I bought a couple of chile peppers in, appropriately, Chile; I had eaten one last night so I knew that they were smoking hot. To keep my dinner from being too spicy I cut open the chile and pulled out the seeds with my fingers. While the pasta was cooking I took a leak behind a tree. A couple of minutes later my privates were on fire. I was wondering what the hell was going on. What could possibly have suddenly set my balls on fire? It didn't let up, I started to get worried and I was so uncomfortable I was wondering what it would be like to show up at the hospital with a complaint such as this. I put some Cortisone on it and after about 10 minutes it calmed down. Later it occurred to me: it was from the chile on my fingers! I had a good laugh over it... bad camping hygiene can be dangerous!

I had a shower and shave (with hot water! Not always a given at municipal campsites) for the first time since Santiago. It felt awesome.