Taipei to Yehliu Geopark : unfinished business with some hoodoos 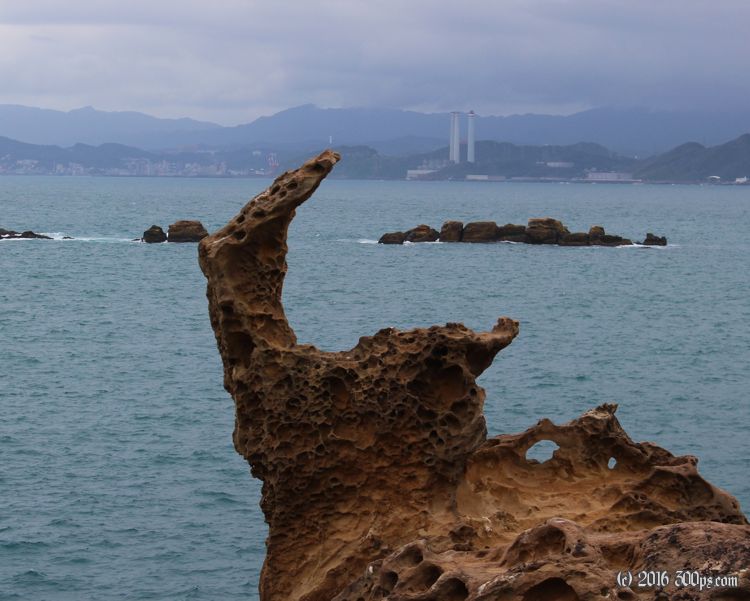 Typhoon Malakas got in the way of me visiting Yehliu Geopark last week; I rode out from Taipei only to be told at the gate they were closing due to the impending arrival of the typhoon. Not to be deterred, I signed up for round two of hellish mountain grades through Yangminghshan National Park to pay a visit to the parks hoodoos created by erosion on Taiwan's north coast.

The mountains are all fogged-in with rainclouds at elevation. I stop and put on my rain jacket and turn on my lights to limit the chances of getting rear-ended by a scooter.

Yehliu Geopark costs $80 NT, or about $2.50 US dollars. Worth the trip, however even on a weekday the place was crawling with anxious Chinese tourists. I really don't get the selfy-stick thing. I would feel embarrassed to plant myself in front of a hoodoo and snap pictures of myself with a cellphone on a stick like some kind of new-age marshmallow.

The crowd clears out real quick once I start climbing the stairs to take the path out to the end of the peninsula. I guess they don't want selfies bad enough to sweat a little. The peninsula has great views of the coast north and south. I find a few pockets of bird photographers camped out in various places training their equipment on the bushes. Not sure what was there, I didn't see any exotic wildfowl myself.

The ride back to Taipei is 35 kilometers of mostly urban death-ride. I have a blast weaving in and out of traffic, trying to carve out a spot among the swarms of scooters. I see a couple of bad scooter accidents. Not too surprising given the way they pass each other with only inches to spare. I've seen more than a few checking their cellphones while they ride as well.