Basel to Thones, France: Pure joy in the Alps. 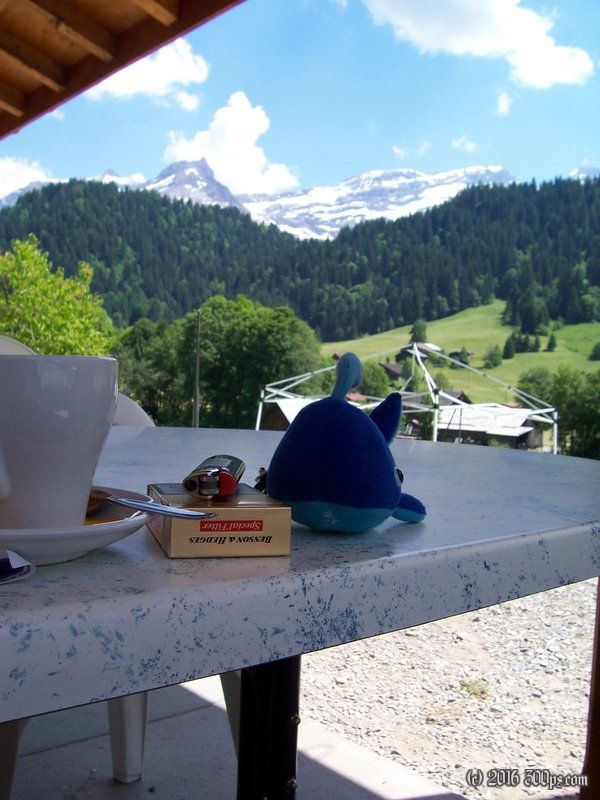 Up early at 7:30am, no broken pillow today, Franck is off to work and I'm heading towards France. It's hot as hell: about 95 degrees. I pack up and pick up the bike on Solothurnerstrasse. First time I've mounted the pacsafe (it's like a wire mesh thing that locks, for protecting backpacks) lock on the back rack to cover my bag. It works pretty well but there is still quite a bit of loose wire, probably should have gone for one size lower.

I get on the highway right out of Basel and ride slowly (this being Switzerland and all) until about 10 Germans on rice rockets pass me up. I stick with them figuring there is safety in numbers, running 30-40kph above the speed limit. They drop off in Bern and I keep going down to Fribourg where I can now see the alps.

The secret to finding good roads in Europe (not too hard in the Alps) is too pull out the map, find anything that says "Col", "Spitz", "Port", or "Pass" on it, then head in that direction. The closest thing to this description near me is something called "Jaunpass". After about 15 minutes of riding towards Jaunpass I start hitting what I came to Europe for: winding hairpins up and down the mountains. I keep riding them all day long, moving from German Switzerland to la suisse romande (French Switzerland), then into France. All of the passes I ride today take about 30 minutes to an hour to finish. They go up..up..up then down..down..down. Not much in the way of traffic in my direction except for the occasional truck or car to keep the passing skills sharp. Lots of bikes coming the other way. Everyone waves here, pretty much like the States except here there are hardly any Harleys and the ones that are out there actually wave. In the States they're usually too cool for that...

At the above cafe a couple of people ask me about my license plate and we get to talking. One of the guys shipped his motorcycle to Australia in the 80's and did the whole continent, he said it cost 4,000 Australian to ship it. Nice people, not much of an accent but they say "septant" instead of "soixante-dix". I always associated that with Belgium, I didn't know that the Swiss did that. They keep asking me why I speak French so I go through the whole story.

The program for the day: Jaunpass, Col du Pillon, Col du Grand Cucheron, Chamonix, Albertville. I pass the Swiss-French border on the way to Chamonix. For some reason the customs agent thinks I'm German and I don't disabuse him of the notion. He tells me the limit on hard cash is 7,500 Euros, I tell him I wish I had that much to declare and we have a laugh. The scenery around Chamonix is unbelievable. I don't think I had ever seen a real live glacier before. From only about 1/4 mile away it is very impressive, especially when it's 85 degrees out.

I drive by the Olympic sites at Albertville. Very incongruous in this tiny town. At some point I pass a huge line of trucks that goes on for about 5 miles on the highway headed in the other direction. I find out later that this is because of a fire in one of the tunnels going to Italy that happened in May? or thereabouts. Now all traffic is being funneled through one tunnel and I guess it can't handle the volume of trucks.

By the time I hit Annecy I'm dead tired and start looking for a place to crash. Out of the mountains it's back up to 95 degrees and I'm frying. To add to the aggravation Annecy is bursting with vacationers and there are a number of traffic jams along the lake. A beautiful area but too touristy for me. I head back into the mountains and find a hotel in a town called Thones, nestled right between huge granite cliffs. Unfortunately the food and the room don't live up to the scenery but it's cheap for France: 36 Euros including breakfast. I walk around and have a cafe on the square.