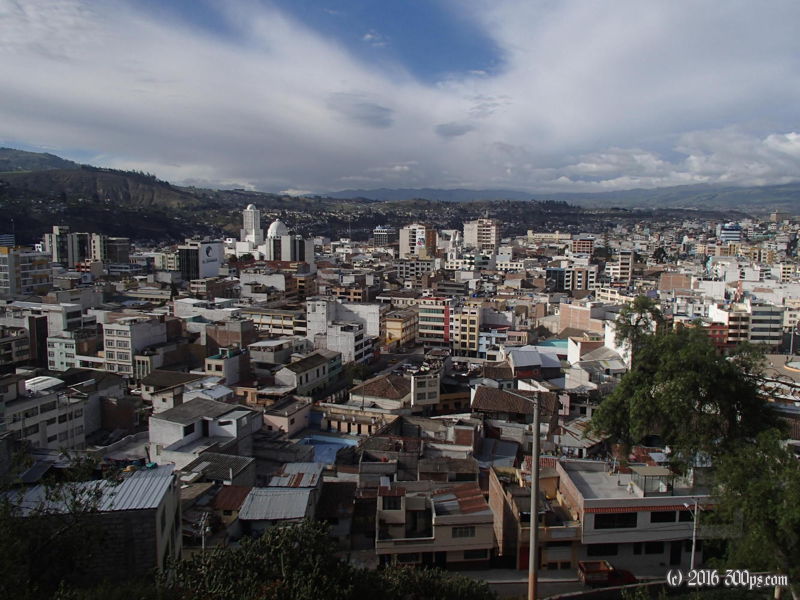 Went for breakfast, had a coffee, went shopping, and generally futzed around until I finally got on the road at 10. There was a 900 meter climb leaving Riobamba that included some rain but not enough to get really wet. Near the top of the climb the police had the road blocked and there were some people in suits walking around. I don't know what they were up to, if they were looking for someone or if the suits were engineers. At any rate they let me through and on the other side was a 3 kilometer-long line of cars and trucks. Every third vehicle asked me why the road was blocked... I felt like Ecuadorian highway public information officer after about 20 minutes of this. Since I was still climbing I was going slow and couldn't ignore anyone. I told everyone that there were engineers working... not sure if it was true but why not.

I got up to about 3,450 meters before a long and fast descent started. When the road had flattened out a bit I ran into young American woman touring solo with a trailer. We chatted for a bit about what to expect in different countries then traded photos before moving on. Afterwards when I though about it I realized that she is the first American woman touring solo that I have ever met outside of the States, and only the second American woman I've met on a bike in South America (the other was a couple from California I met in Patagonia). Good for her, it can't be easy.

I arrived in Ambato around 4 and got a room in a cool old building for just $3.50. My dinner cost more: $5. I am surprised by the size and sophistication of these Ecuadorian cities. Loja, Cuenca, Azogues, Riobamba, and Ambato are all good-sized urban areas with modern infrastructure. I guess I had gotten used to long distances between cities in the rest of South America, and hardly any of them other than the capitals have compared with the cleanliness, infrastructure, and well-maintained colonial architecture of these Ecuadorian cities.