I'm out the door early to maximize the riding time of these short, winter days. Before sunrise Narbonne's Christmas lights are still reflecting on the placid waters of the Canal de la Robine. 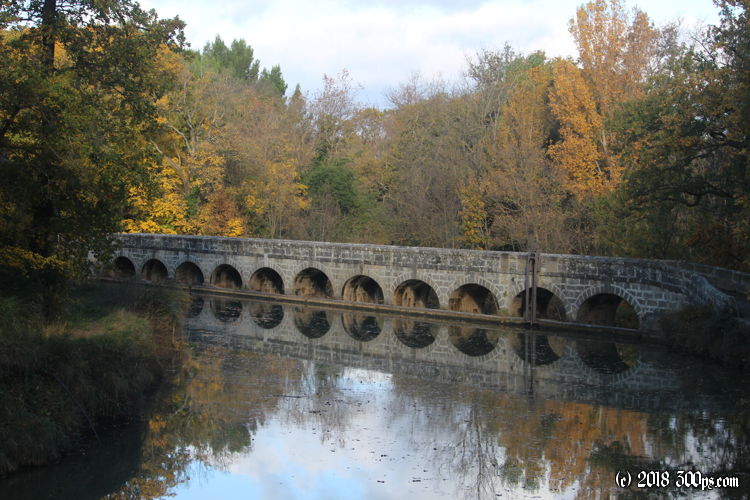 I'm out the door early to maximize the riding time of these short, winter days. Before sunrise Narbonne's Christmas lights are still reflecting on the placid waters of the Canal de la Robine. I grab a baguette for later and head out of the city to the west on the Route de Carcassonne. The bike feels heavy. It's been a while since I've ridden with a full load of camping gear. The Tramontane (wind out of the northwest) is blowing but not very hard at 15-20 km/h. it slows me down but fortunately I've been spared the worst; at times it can get up to 100 km/h around here.

I join the Canal du Midi at Homps. The canal has been emptied here -- and on many other sections I will come across today -- to repair damage to the banks from some severe flooding this fall. I try to stay on the canal tow path as much as possible from here to Carcassonne but when they work on the banks they close off the towpath to foot/bicycle traffic. I have to take some long detours to get around it all.

I give up on the canal after a while. Too many detours, too much mud. I want to make some distance today so I do the stretch through Carcassone to Castelnaudary entirely on pavement. I get back on the towpath leaving Castelnaudary because the canal offers the best camping possibilities.

I've got a camping spot in mind. Although I've never actually stayed there, I noticed on past trips that the area around the écluse de Naurouze had possibilities. A smaller canal splits off from the main one making a sort of island that has high embankments and lots of trees. I'm almost out of daylight when I reach the spot. 5 minutes of poking around and I've found myself a nice, secluded campsite on the bank of the main canal. Since they are closed in winter I don't have to worry about any boats coming through the locks to disturb my peace. I set up quickly and make dinner in the tent as the temperature has dropped off quite quickly after sunset.